Location: Zhujenka is a land-locked province protected on all sides by the foothills and mountains beyond. It is a part of the Old Empire, lying north-east of Rishoka and south-east of the lake.

Climate: A temperate climate, the residents of this province experience four distinct seasons enabling them to obtain a good yield from the aeriable farmland. Summers have a rather hot and humid phase due to a moderate amount of rainfall. Periodic dry spells have been recorded but for the most part the weather is idyllic. Snowfalls can accumulate rather swiftly, though nowhere near the levels as is experienced in upper elevations. Flooding in the spring and again during the fall seem to be the greatest threat due to run off from the melting snows and the preponderance of thunderstorms and squalls.

Primary Terrain: Being situated as it is in the foothills of the mountains, there are fields for cultivating, but these are often terraced to fit into the curve of cleared slopes. While there are no true rivers in the province, there are numerous streams that cut through the hills and are often prone to flash flooding due to the narrow flood basin created by the hills. Although it is optimal for farming to plant in these flood basins, most natives have learned that it is safer to farm upon cleared sections of the forest at higher elevations than these low lying areas. Hay and other sorts of fodder for livestock are the predominant crops grown in the low regions for they are fast growing and can be harvested before the flooding season leaving the farmland upon the upper slopes for crops which require a longer growing season.

Government: Originally a farming community, the Maevia family established itself as the governing body through land grabs and power struggles. A bloody past created a warrior class that was able to hold onto power. As the family prospered so did the province for they were skilled at making improvements while managing the upkeep of existing strongholds. Ever mindful of their bloodlines, advantageous marriages cemented their place as rulers of Zhujenka. A Maevian has occupied a seat in the Imperial Parliament for the last 150 years. The monarch assumes the title of Count and succession is hereditary passing through the male line.

Population: Around 18,000 as of last census. Close to 7000 live in the capital city while close to 10,000 live within the borders of the province. Of those nearly half are from smaller rural communities. 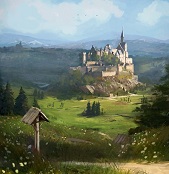 Kaerndal: Named for the castle in which the ruling family lives, Kaerndal Hold, the city serves as the seat of power for the province. Upwards of 7000 people live in the city which is situated upon a huge promontory or rock elevated above the surrounding landscape of rolling fields and foothills. Forests are well within reach upon the slopes of the foothills, but many of the nearest lands have been cleared for farming.

Stables: Noted for breeding horses, the stone stables are but one example of the province’s former opulence. Constructed of hand hewn stone, master craftsmen painstakingly created a work of art. Mosaics decorate the thoroughfares, stone pillars hold up a vaulted roof, while ornamentation carved by the finest artisans is visible throughout. Currently housing the Kaerndal’s mounts for the military, it still keeps a smattering of racing and breeding stock, though certainly less than at the height of their power. The stables are not open for public use but it is a noted example of its former glory. 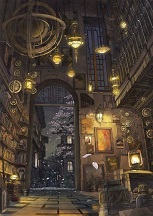 College: Kaerndal has a college where the nobles of the kingdom send their offspring for formal education. It boasts an impressive listing of instructors, alchemical texts, and arcane lore from which those who train in Myst manipulation can research. While not the largest facility of its kind, it has been maintained despite a fire in its earlier days. Situated in the heart of the city, it boasts housing and ample classroom space for instruction. Although the bulk of the facility is now constructed from stone, part of the original library survived and opens onto an inner courtyard of the grounds with ornamental trees in the garden.

North Creek Market: Although not situated on the stream itself, the market is so named because it sits on the northern face of the promontory upon which Kaerndal is located. The creek itself is in the lowlands outside of the city but no one seems to mind. What commerce that is conducted on the navigable stream is offloaded and carted on wagons into the city.

The Nohwaeder Forest:
The rural province of Zhujenka has a great forest which commands a vast swathe of land over both hills and flats so dense that no citizen of the province can truly claim to be capable of completely navigate the area. There are also ancient stories that have been told for generations in Zhujenka that say the Forest is enchanted in someway, infested with either spirits of fey beings, which will torment any who dwell too long within the forests borders. These tales where not completely without precedence as many would be explorers did find themselves becoming lost within its depths and some never returned at all. It wasn’t until nearly 400 years ago during the rule of the first true Count of Zhujenka, Kaern Maevia, that the truth became known. A 1,000 year old Enclave of Elvish druids dwelt within the Forest of Nohwaeder and it was their magic that had turned away trespassers over the years. Today the Forest is under the domain of The Druid Enclave of Nohwaeder and they are free to treat trespassers as they wish.

Histor Grove:
The secretive grove that lies in the heart of Nohwaeder. Protected by powerful spells, enchantments and wards it is impossible for any outsider to find there way to the home of the Druidic Enclave without being invited. Those who are invited will then find it impossible to find their way back again without permission. The grove is a sacred spot to the Goddess Y’nera, the Mother of the Forest. Little else is known about this place except that it is named after an Elf called Histor who led the first group of Druids from the Lantheri Wilds to Zhujenka.

The City of the Dead:
For centuries the people of Zhujenka had small graveyards which dotted the land however as the province grew, and especially as the population of Kaerndal increased, the question of how to deal with the disposal of the dead became a concern. Luckily this was around the time that the Lords of Zhujenka came into contact with the Druidic Enclave of Nohwaeder who proposed a solution. A huge site not far from the City of Kaerndal was established to serve as a centralised place of rest for the deceased citizens of the province. Over the centuries it has become a mixture of grand mausoleums of the rich, winding underground tombs and vast fields of graves. The Druidic Enclave oversees the care for the City of the Dead not only keeping the buildings and grounds in order but also protecting it against any intrusion from the Undead or Necromantic intruders. The cemetery lies well above the floodplain keeping the graves safe from flooding and the people safe from the spread of disease typical to contamination of the water table.

History:
Originally a farming community, the Maevia family established itself as the governing body through land grabs and power struggles. This bloody past created a warrior class that was able to hold onto power. As the family prospered so did the province for they were skilled at making improvements while managing the upkeep of existing strongholds. Ever mindful of their bloodlines, advantageous marriages cemented their place as rulers of Zhujenka. A Maevian has occupied a seat in the Imperial Parliament for the last 150 years.

During the reign of Kaern the Builder, many of the fixtures in existence today were constructed. Avid to breed not only an elite lineage of Myst users, Kaern was eager to breed a line of horses that combined speed with stamina to give his military the edge over their neighbors. His visionary ambition proceeded to fuel the construction of Kaerndal Hold, the College, and Stables. It was an era of conquest with the city growing up around the keep as workers stayed on to build a life for their families.

It was during this era that The Druid Enclave of Nohweader was discovered living in the forest, and it was the magic of the Elves within the Enclave that gave rise to the forest being haunted. A strong friendship grew up between the druids and those of the Maevia as is evidenced by the City of the Dead being under the stewardship of the Druids. Not only to they keep the graveyard in good shape but they protect it the graves from the depredations of Necromancers and others who wish to create the undead.

During Kaern's reign, the province was acknowledged, the Lord and Lady of Zhujenka being bestowed the rank of Count and Countess by The Empire. Succession is hereditary passing through the male line, and in rare cases to the women provided they marry and their spouse takes the family name. This provision also required the lack of challengers for infighting was a common occurrence. The most noted era of familial infighting occurred in the generation of Kaerndal’s sons and threatened to tear the province apart. Kaerndal sired numerous children, both legitimate and illegitimate, but of particular interest were the heir apparent Didier Maevia and Arjan the Bastard. For a time the province was divided in its loyalties and the death toll began to rise until Arjan routed his brother’s forces in the very streets of the city. Fire took out nearly all of the college save the inner library which now opens up onto the courtyard of the stone facility. In keeping with the terms of war, Arjan was legitimized as Lord of Zhujenka and took the Maevia name for his own.

Although conquest had been used in the past to assume the mantle of Lord of Zhujenka, as yet no one outside the Maevia family has dared to challenge a sitting ruler. While family ties are strong, numerous members within the family make for numerous rivalries. It has been roughly 40 years since the Lord Tertius fought his uncle for the title but as the former Lord had no sons it was settled in a battle of champions one on one rather than all our war. Upon Tertius’ death, the title passed to his son-in-law who followed convention by taking the family name. As yet no one had contested the current ruler.
Last edited: Aug 19, 2019

Looks good to me. Approved.

Added points of interest: Nohwaeder Forest, Histor Grove, and City of the Dead.
Added discovery of the Enclave and construction of the City of the Dead to history section.

Pending approval of The Druid Enclave of Nohwaedaer Forest.