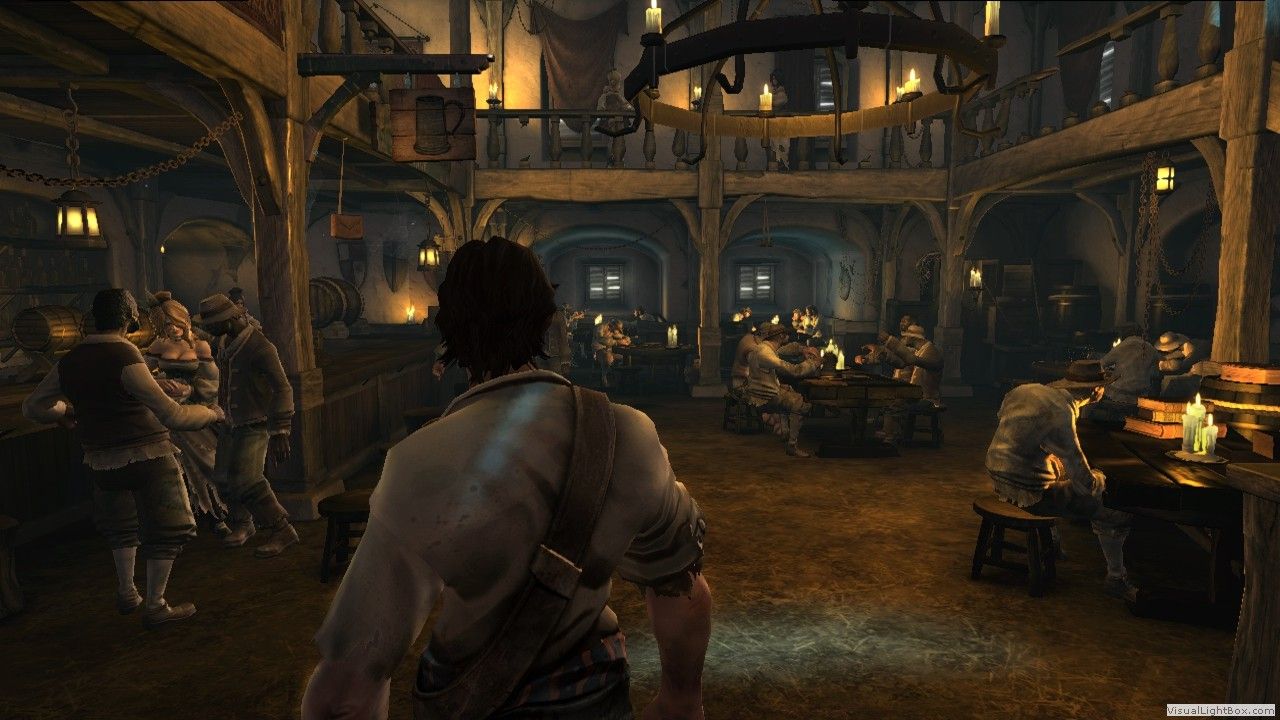 A flock of sparrows flitted through the gray, overcast sky. The day was chilly. Creaking wagon wheels thumped over street stones, pulled by sluggish horse. A man stepped in a puddle as he crossed the street, grumbling at the dampness soaking his shoe as a distant laugh cackled over unrelated happenings. A woman entered the street from a store exit, and a man stopped to let her pass by. He kept on walking along the edge of the Inn passed a fogged glass window caked with dust until he reached the door, opened it and entered.

Inside, libations reigned. Warm merriment roared out the opened door until it closed, containing it inside. Frivolity rolled like the waves of the sea throughout the space, pleasantly filling all levels and corners to their comfort. There lacked no niche of choice, every man's community compartmentalized by group. And on the second floor, at a twin-chaired single table at the edge of the railing overlooking the tavern, sat a lone moderately armored and bearded man with a mug and a plate of bread.

Ruždija kneaded the morsel in his fingers, digging a dirty nail into the cracking bread piece and peeling away the burnt edges while he mulled over a mouthful in listless thought. Staring down at a group of rowdy men, he stilled his jaw to pause at different points of their conversation to selectively listen when curiosity took him. Gulping down a dried hunk, he licked his lips and reached for his mug of ale and sipped a swig before clopping it back down on his table. Occasionally boring of the group, his eyes would wander until they rested on some decorative elk head in haunting candle-light or diving neckline of perspiring cleavage. Nearby voices blurred in the background, debating governance and the Empire's factions of thought. Only just then did words and phrases ring with clarity, from parliament to mages want power. Creaking boards along the second floor might be heard coming from behind the man sitting there. Nothing out of the ordinary though. This was an inn and tavern. Mostly a tavern and it provided drinks and food for the travelers passing through. Falauna was just another one of them. Something was different about her however.

Along with the creaking boards, the sounds of a struggle happened. Some drunk patron had found his way into her room and was attempting to take advantage of her. She might not be heavily trained in the art of battle, she was usually able to take care of herself. A loud thump, the sound of a body hitting the wall, and a grunt.

Escaping with her skin in one piece, the woman ran down the hall in the direction of the commons area, and as she turned to look behind her, she tripped on a board that wasn't flat with the rest of the floor. Falling almost face-first to the ground, she landed on her wrists and let out a grunt of pain. Attempting to regain at least some grace, she brushed the hair out of her eyes and found herself looking at the boots of the man.

Giving herself a mental groan, she gave up and stood up, wincing at the pain in her wrists when she put any amount of pressure on them.

The drunken man came stumbling out of her room and decided he wanted to get some revenge. This time he had a knife in his hand as he came stumbling their direction.

Although creaking boards were abundantly average and all encompassing amongst the shuffling footsteps, a wall thump together with a pained grunt was just enough unwelcome accompaniment to the instruments below to haunt the back of this magi's mind.

He turned a stiff glance from the corner of his eye, subtly peeking over his shoulder at the floor behind him. That was all. When it appeared no one was involving his backside in whatever commotion was occurring, he opted to selfishly return to his meal. He picked up the bread and tore another piece from it, crumbs sticking to his beard and sprinkling his lap.

Missing the sound of the door and subsequent footsteps, just when he had looked away, he was shaken by the sudden collapse of a woman beside him; his head snapped in her direction. He was underwhelmed in his following reaction. Shocked eyes narrowed and he fed himself the piece of bread with a sigh, chomping loudly. Another barmaid drunk on her own supply, he supposed.

"Qmuite nthe tunmbal, eh," he mumbled through the unattractive chewing process. Watching her struggle to stand was difficult to watch. It soured the taste of his bread, and he winced for more than one reason. This piece was an edge with a particularly hard, burnt crust. It crunched and crackled against his teeth.

The drunken man's stumbling was much more audibly profound than the lady's initial entrance. That is until she fell to his boots, which were coated in dried mud. No doubt the entire floor needed a sweeping from his boot-steps alone. The drunken man's entrance instead demanded full attention, and so it creaked Ruždija's neck around to see what was the matter. And in so doing, he lodged a piece of bread in his throat from drawn breath.

He choked. It started as a tickle. He struggled to stand between the man and the woman just before noticing the knife, instantly regretting committing to her casual defense.

"Li-sten, friend. Ahugh! Ahem. I don't think, akhough. I dom't thlink the l-ady mneant amny harm, ahermm. Akhugh!" Coughing in the man's direction didn't seem to serve the same sentiment as his gargled words, despite his pleading hand wave. His overconfidence kept his hands from his sword. He was larger than this man, and had fought much fiercer opponents. However, he was not looking for a fistfight, let alone a sword fight. With the simple muttering of a few words, he could have this man impaled on a wooden spike, although words were of particular difficulty in the current moment.

Despite his protests, the drunken man would not be stopped in the midst of his own mad ramblings and accusations. He would not be stopped in part due to that damnable uneven floor-board that also tripped him as he stumbled towards them. The drunken man's momentum took his dipping head and shoulders right into Ruždija's solar plexus, taking the wind out of him and knocking him backwards into the lady behind him. Tumbling onto her seemed inevitable before this magi knew what had hit him, yet he reached for his chair and took it down with them. The table jostled. Ale spilled and the plate of bread clamored to the floor.