Will held the sleeping child as he walked down the currently empty street. They had been between towns and hadn't run into any of the creatures all day. They were only a few days out from home and still had a couple hundred miles to go.

He listened quietly to wheezing breaths of his sleeping niece in his arms. It was hard to listen to, but it gave him the strength to take another step and then another and another. They needed to get to Fort Benning in Georgia. They had been told over the radio than they had medicine that could help treat his niece's condition. It was a long shot, but it was the only choice they had. Medicine was scarce these days, and this was likely their only chance.

He glanced over at the green roadsign it showed they were only a couple of miles outside of a town called Derry. That was good, it would be dark soon and he didn't want to get stuck sleeping outside. He couldn't risk Alice getting any more sick than she already was.

The warm, late summer breeze blew across Will's face as he started walking again. Hopefully, he could find a place and some food. He had brought food with him but he only wanted to use that in case of emergencies.

Open to anyone who wants to join. Its a pretty generic zombie RP set in the southeast US. If you have any ideas/questions feel free to ask!

A blacked out '68 charger cruised down the forsaken back road, its 440 six-pack growled lowly as its driver stuck to high gears. Despite the modifications made to it to make it remarkably fuel efficient, it wasn't bottomless. And a V8 will always be on the thirsty side. Of course there's the option to get something smaller...but after everything this car and it's owner had seen, that won't be happening.

A song played over the radio, probably one of the last stations this side of the country. At least the music didn't suck and the info they relayed was priceless...not to mention the stories they read and told helped keep a man sane through these long hours. The man behind the wheel sung along heartily, though he did a good job of missing every single high note in the song.

As he drove he spotted someone wandering in the road...kind of like one of them. He slowed down until he came to a halt right beside the stranger. The driver drew what's clearly a military-grade pistol and aimed right for the stranger's head. But he didn't move after that. "Man, you look like shit." the driver perked up. He dropped the hammer and lowered the gun slightly as he looked both the man and the baby over. "You're still breathing, so I guess that's enough of a white flag...you armed?" he asked sternly, inspecting the man.

He looked around a bit then back to the man. "Come on. Get in, hands where I can see them." he ordered, opening his passenger side door for the man. "...that baby looks in bad shape. What's wrong with her?" he would ask after the man got in. 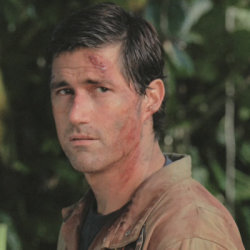 The rustling of the leaves, endless roads of cracked and decaying pavement, the days had slowly blurred into weeks, which fell into months, and it seemed that any semblance of time that Richard had was gone. He had abandoned his country, countless civilians and his own sanity, he needed to tell her everything, tell her how sorry he was, and beg for forgiveness.

But, the journey from Cleveland to Georgia had been grueling, it seemed the dead had taken everything from everyone, leaving them all cold and heartless. He had barely escaped a few narrow calls with the dead and it seemed getting involved with others only pulled him away from finding Jennifer.

She won't be there when I get there..she'll be gone or dead,...Even if I find her, would she want to see me..I'm sorry baby girl, you never deserved the pain I put you through. His teeth clenched together as he looked out towards the road from where he sat beneath a tree. He had gotten so close, yet it seemed he couldn't bring himself to face his fate, to face the past he had brought upon his daughter. I can't... I'm sorry.

He would bring his pistol from his holster, pointing it to the side of his head, closing his eyes as he clicked off the safety. The images of his youth, Samantha and Jennifer, Iraq, the cancer, her death, Troy University came flooding into his mind as tears swelled, the barrel of the pistol shaking before he dropped the pistol into the grass--clenching his face as tears swelled down his face; he couldn't keep doing this.

He heard the vehicle before he saw it. He hadn't heard the sound of an engine in months. Fuel was becoming ever increasingly scarce and most major roads were nearly unusable.

He would have hid if he was by himself, people were a toss-up if they were friendly or not. In this situation, hiding wasn't much of an option as there were only open fields on either side of them. He shifted, waking the six-year-old girl he had been carrying as he lowered her to the ground.

"Get behind me." he instructed the girl as the vehicle pulled up, WIll standing just outside the driver's side window. Will froze as the man pointed a gun at him. He stood deadly still for a moment until the man stopped.

He lowered the gun slightly and Will reached in and pushed the hand aside with his left, drawing his holstered concealed weapon. It wasn't exactly what he had been trained to do during his ten years in law enforcement but it was the best option that allowed him to protect the girl behind him.

"Drop the gun!" he spoke in a commanding voice, his own gun pointed at the seated man. If the man so much as flinched, Will would shoot him. If he was smart, he would have just shot the man anyway, he had already pointed a gun at him, but he was not eager to kill people even in the apocalypse.

This was not at all the reaction he expected. Instead of working with him, the man drew his own gun while trying to stick him up. It seemed that these two people were the last two people who should ever draw a gun on each other. In one swift move, the driver grabbed hold of the man's gun and pulled him into the car. In other circumstances, he would have laughed over the position they were in, but now was not the time to laugh.

The stranger's pistol was pointed out of the driver's window, while the driver's pistol was awkwardly pointed down to the floor of the car. Neither of them had a shot on the other, and both were in pretty awkward positions. "Listen, fucker, I wanna help you out! Now let go of the fucking gun!" the driver shouted at the man. "I was offering a lift now get the fuck out of my face!" he shouted at him with a rather strange accent.

The shouting in this quiet area might be heard by a certain suicidal man contemplating blowing his brains out if he was close enough...and it might attract a few undead friends too if they weren't careful.

The Milwaukee engine thundered as the Road King sped down the forsaken freeway. Kim was lost in her own thoughts. The roar of the engine and the wind in her ears, took her back to days long past. She still remembers the feel of wrapping her arms around his body as they cruised down the country roads outside of Columbus. But things had changed. She still doesn't know how it happened - how they ended up walking around. But they did, and they took Dan. She would never forget the screeches and how he rose from the dead, hollow-eyed and bloody. She would not forget as he came after her, same as them. She remembers hopping onto the King and riding off. She raided as many guns as she could carry - sawed-offs, pistols and a full bodied semi-automatic shotgun. She then sped out of Columbus and never looked back. All the guns and ammo were now either strapped to her, or stuffed into the luggage compartments. When they dared hobble towards her on the roads, she blew their heads to pieces with the sawed-offs. She just didn't care anymore.

She stopped to get fuel, and tuned the radio at the register. As she grabbed a few packets of crisps, the Stones' Sympathy for the Devil was playing. "Fuckin' fitting." she mumbled as she walked through the store to the pops in the dead fridges. The song finished just as she was about to walk out. She stood at the radio to listen what was being said. The DJ said that Benning still held some resistance in Georgia. "Well, then that's where I'm heading." she said as she turned off the radio and got back onto the bike. She then sped down the 280 freeway in the direction of Fort Benning.

Richard peered towards the gun in the grass, picking it up and placing it back into his holster. He would wipe down the dirt off his OCP before hoisting his pack onto his back. With his M4 slung around his shoulder he would begin to hike along the broken road that lead towards Fort Benning. Once there, he would collect up some supplies and assess the military situation in Georgia.

The national guard in Ohio had fallen apart within the first few weeks and a bombardment protocol had been placed for the cities of Columbus, Cleveland, and Cincinnati. Though the Captain had abandoned his own post long before the bombing was set to take place. As he walked, he could only hope that the same fate hadn't befallen his own daughter.