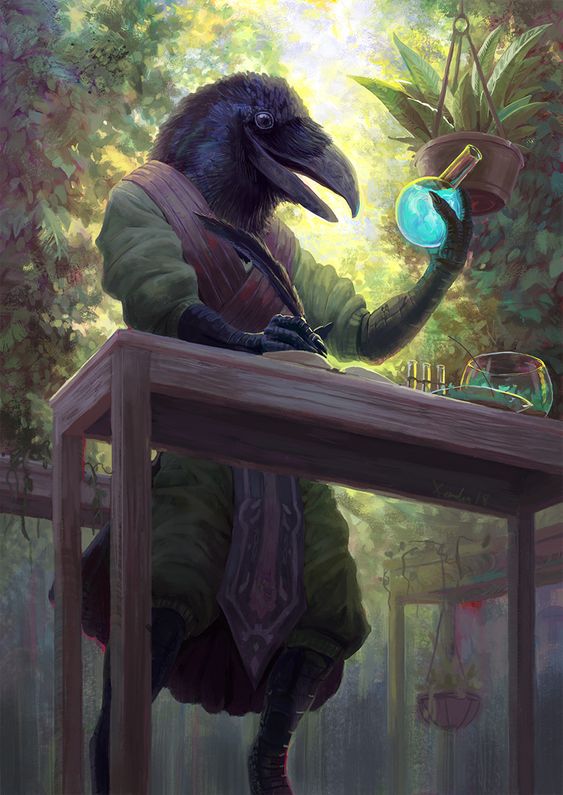 Biological Information:​
Tengu is a collective term used to identify the Avian Humanoids that have occupied the previously uninhabited island of Xak'tharkus, while incapable of flight, these individuals are capable of sentience but rarely seen beyond their island homes. Most Tengu share physical traits with either Corvids, Fowls, or Raptors. Although all tengu are biologically compatible, this difference of appearance has caused their society to adopt a rigid caste system.

Generally, the Tengu species tend towards lighter frames favouring more agile movements but their specific group and class can heavily influence how their body develops. It should also be noted that this list isn’t exhaustive and many other subspecies exist although their role in society is less clearly defined. 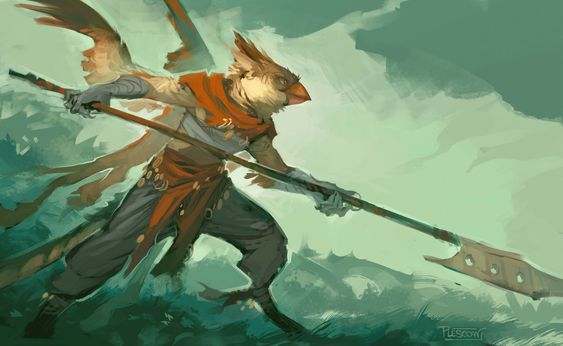 Those whose appearance matches those of Raptors tend to hold positions of power followed by corvids and finally Fowl. If a child is born with the appearance of that of a higher caste they are most often taken from their parents to be adopted by another clan. While it is possible for a tengu to rise above their birth caste, such individuals are extremely rare and noteworthy.

Those born resembling a Raptor form the raptor caste, they tend to be physically stronger than their counterparts, due to being in a militaristic dictatorship they are typically raised to be warrior monks or military leaders such as warlords, this gives them a vast amount of political power however they are expected to protect both those that serve them and those they serve under.

Examples may include those resembling Falcons, Hawks, Owls, Eagles, and Harriers.

While physically weaker than their counterparts, Corvids usually have a greater understanding of the world around them, showing heightened intelligence and are more comfortable working alongside others for the benefit of their respective clans. This makes them more suited for roles within the Civil Service, Diplomacy, and Espionage which runs rampant across the territories. Those without clans tend to wander in search of companionship or become merchants. 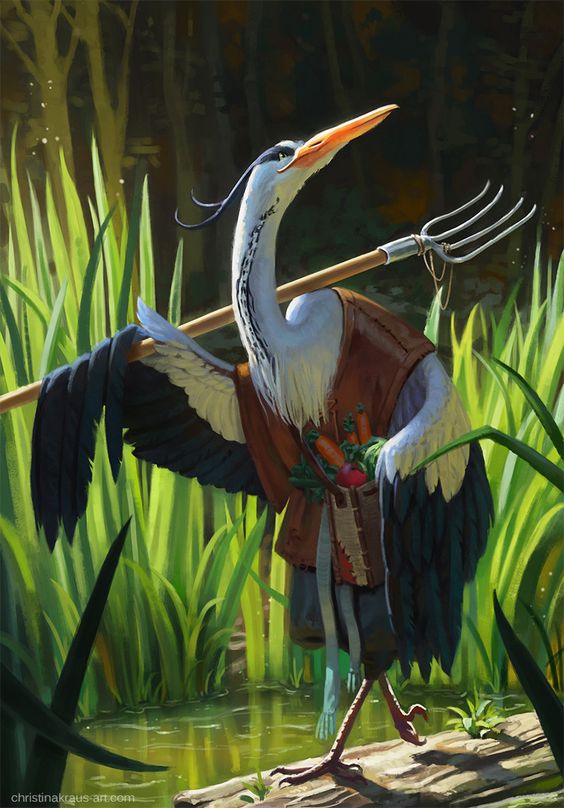 Fowls are hardy and possess moderate intelligence fulfilling a wide variety of roles within avian society, from Farming to Manufacturing and as such are the commoner class of their race. Due to this they answer to a ruling clan and are often brought into the service of the militia should they be threatened by a neighbouring power.

Examples may include those resembling chickens, peafowl, waterfowl, and pheasants

Males on average tend to be slightly smaller than their female counterparts measuring within the region of 5"1' ~ 5"6' with many exhibiting brighter more colourful plumages. In the case of most Corvids, they usually have a prismatic sheen to their feathers.

Females measure in roughly 5"4' ~ 5"9' on average and weigh slightly more, as a result, their plumages tend to be more neutral colours and patterns.

All Tengu are capable of breeding with Tengu of other castes and the result of such couplings will usually favour the mother's caste. Tengu lay eggs usually within a month, the incubation period of which can be anywhere between 6 ~ 8 Weeks. It's not possible for Tengu to produce young from other species and thought such an event could come to pass will usually disgust them at best and insult them at worst.

As previously mentioned Tengu operates on a caste system, most are born without surnames and earning one without being born into the clan requires significant contribution and investment. As a result of those with a surname wearing them as a badge of honour.

As a whole, however, their strict caste system discourages interaction between those of a lower class with those of higher birth. Respect towards those of a higher clan is taken seriously. Breaking these traditions can often be dangerous for those involved and rarely do such situations end with a happy story either for one or both the parties involved.

Roles within the Civil Service that involve supporting one of the ruling families are highly respectable jobs for many Tengu, even the lowest-ranked members take pride in their work. The authority of such individuals can often be distinguished by the colour of quartz weaved into their uniforms with Orange being considered the highest and white the lowest. 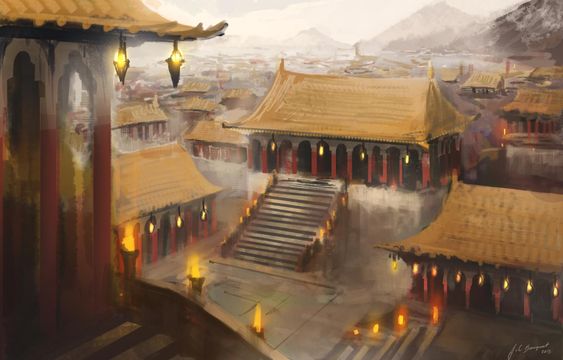 Currently, eight major clans exist within Tengu society, each controlling a portion of land covering the region of Xak'tharakus up until recently power has been in constant flux between them when Ito merged with the Hattori. In the context of the nine families, this created the equivalent of a superpower led by the Ito, who is currently putting both political and military pressure on neighbouring provinces in order to unify under a single banner.

Each clan possesses and is associated with a sacred relic from the Vaults of Xak'tharakus, these relics are believed to be the manifestation of a clans divine right to rule over the castes of their specific region. Stealing such an artefact will usually incite the ire of all factions to ally against the perpetrator.

This has meant wars and border disputes are a frequent event in Tengu society, causing many of the clans to create cheap but effective militia's. This has so far served them well, as they have been able to repel any attacks from their more expansive and powerful neighbours since they first settled on the isle.

The constant wars and militaristic lifestyles of the raptor caste have led to the development of martial arts. Many of which are designed to teach the civilian population the skills necessary to defend themselves from intruders. As such Outsiders are rarely welcomed and are generally looked upon with disdain or suspicion, the exception to this being regarding the occasional trading of necessary materials.

Due to the scarcity of iron in the region, weapons and armour are rarely distributed among the militia, with only military leaders and raptors being permitted to carry such weaponry. Quality armour is rarer still, with many instead of being reliant upon thick cloth or wood plates.

Contrivertly the lack of decent armour has subsequently led to significant development in the fields of medicine and as such education in those arts is well respected in avian society regardless of one's background. 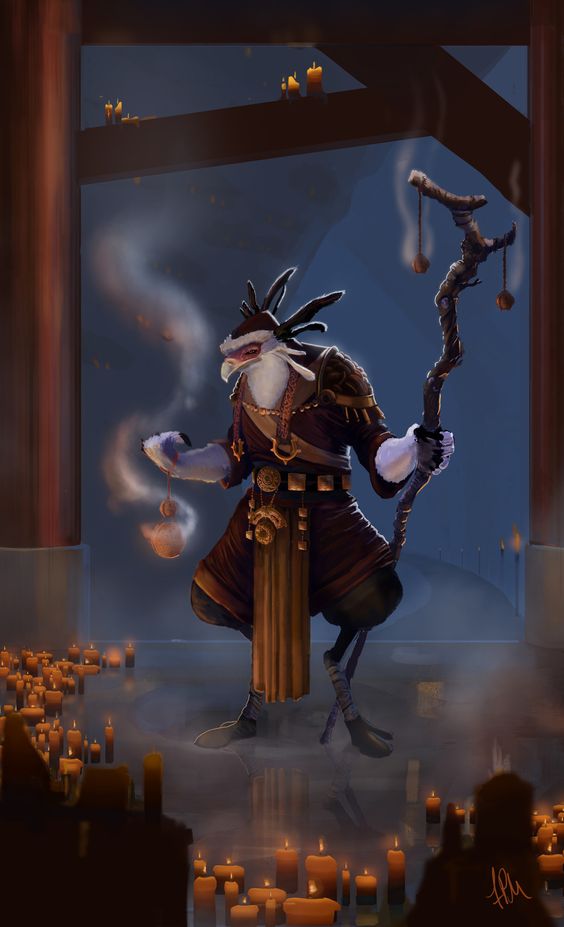 Tengu believes in a pantheon of gods, the most significant of which are based around the four seasons. To the tengu the gods are forces of nature and events that cannot be explained with reason are often attributed towards the divine. Many temples exist across the region, some offering mental and physical aid while others focus on training the body, the latter often being hired as mercenaries to engage in major conflicts.

The most significant of these is Glithen who is most commonly portrayed as an Owl Tengu possessing wings. Sometimes referred to as the Lady of the Silent Wings she cherished and protected the Tengu as her servants making her the patron of family and the hunt. According to Tengu folklore, she was betrayed by one of her servants wounding her, as punishment Glithen stripped Tengu of their wings although her blood would later crystallize to the first Lissant.


Fuyu the Father of Snows is the Tengu god of winter, sleep, and death. Once every year he blankets the lands of Xak’tharakus in snows under which young trees and plants slumber peacefully until the spring. He also holds sway over those about to die, most notably the aged and infirm. It is believed that Fuyu may visit and pick up the souls of particularly wise Tengu and deliver them to their just rewards. He is venerated primarily by monks and clerics. Portrayed as an elderly Tengu with frosty white wings, and his body wrapped in furs.

The Lady of Spring Velia represents the dawn of new beginnings. She embodies new ventures and rebirth and is also the Tengu’s fertility goddess. New mothers, midwives, and farmers, and all Tengu seek her blessings on their surrounding lands. She is usually depicted as a green and red feathered Tengu possessing features more closely resembling a parrot.

The Lord of the Warm WInds Haru watches over plants and animals as they mature. During summer the nights are warm and balmy, the young are maturing, and food plants begin to produce their bounty. Hunting is plentiful and presides over the meat harvest. Summer is the time for study and passing on knowledge from one generation to the next. Haru appears as a handsome Tengu reminiscent of a peafowl with golden accents usually seen wearing a togi robe.

Arsekaslyx has many titles but chief amongst them is the Goddess of Storms or Stormmother, she is the chief dragon in the Tengu Pantheon and is believed to hold sway over all kinds of weather, from fair skies to violent storms. A capricious god, she can be gentle and kind or angry and destructive, depending on her mood. Somewhat of a cruel prankster, she enjoys altering the weather suddenly to cause discomfort, destroy new structures, and ruin plans. Her appearance is best associated with a large serpent possessing iridescent scales.

The tengu calendar begins once every twelve lunar cycles with various celebrations occurring throughout the period, the most significant of which takes place during Winter Solstice and when they pay their respects to the dead. During this time all major conflicts are immediately put on a ceasefire and all are allowed to interact freely, regardless of caste.

Within the individual clans, belief can vary towards different aspects of their gods or even those of more common religion, however, deviance from the core gods of tengu is heavily frowned upon.

Serpents and drakes are considered divine entities and the killing of such beasts is kin to insulting the gods and inviting disaster. 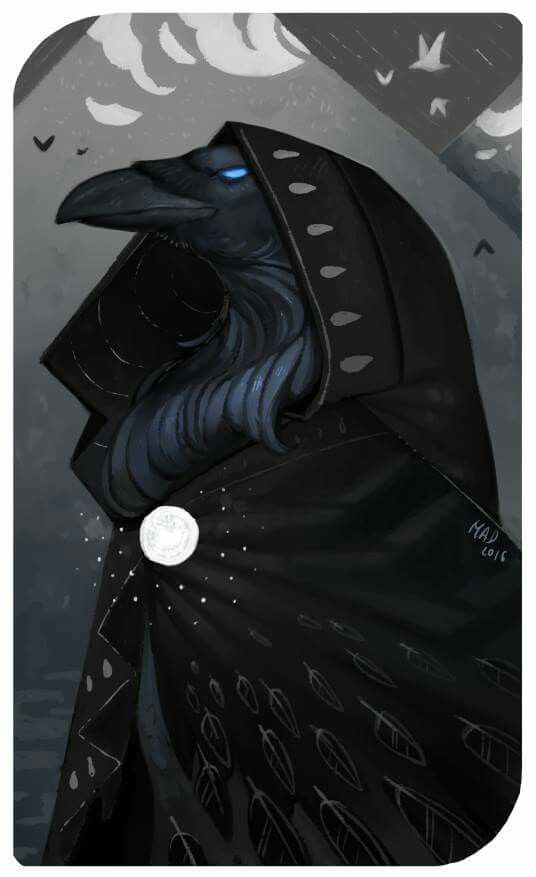 Tengu are a rare sight in the wider world, those that exist beyond the shores of Xak'tharakus are either merchants or exiles. Rarely will a Tengu seek to go out on adventures beyond their homeland, but those that do so are often looking to escape prosecution or in search of wealth, Raptors ending up as ether loners or seeking tight militaristic groups while corvids and fowls are often more comfortable settling into most roles while seeking companionship.