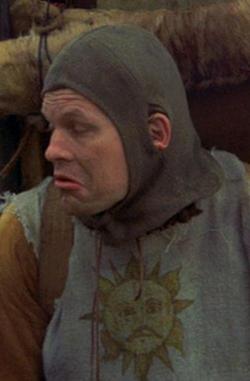 ► City-State of Leore​
JOB OR RANK

Biography Geoff was born as the son of the guard captain. As such, he always had a decent grasp of swordplay, if only from observing the true professionals of the craft. However, as but a lowborn, his life remained largely boring save for the occasional job of polishing or maintaining wargear in the barracks. However, most unlike a lowborn, he a wit far above what might be expected of one so uneducated as he, and soon became renowned as not someone to get into an argument with, lest he make a fool.

Time came however, where he met a man by name of Tybalt Monteaux. Though initially at odds on account of their drastically different upbringings, the two began to grow to become solid friends, Geoff providing that keen verbal edge to make conversations interesting, yet ultimately sharing the same values as his friend. When it was announced that Tybalt would embark to the wider world to seek glory and fortune, he sought out Geoff personally and asked him to become his squire. With a father encouraging such, it was virtually instantaneous that Geoff had accepted the task, to learn the ways of true martial warfare in exchange for a handful of chores he knew quite well already.