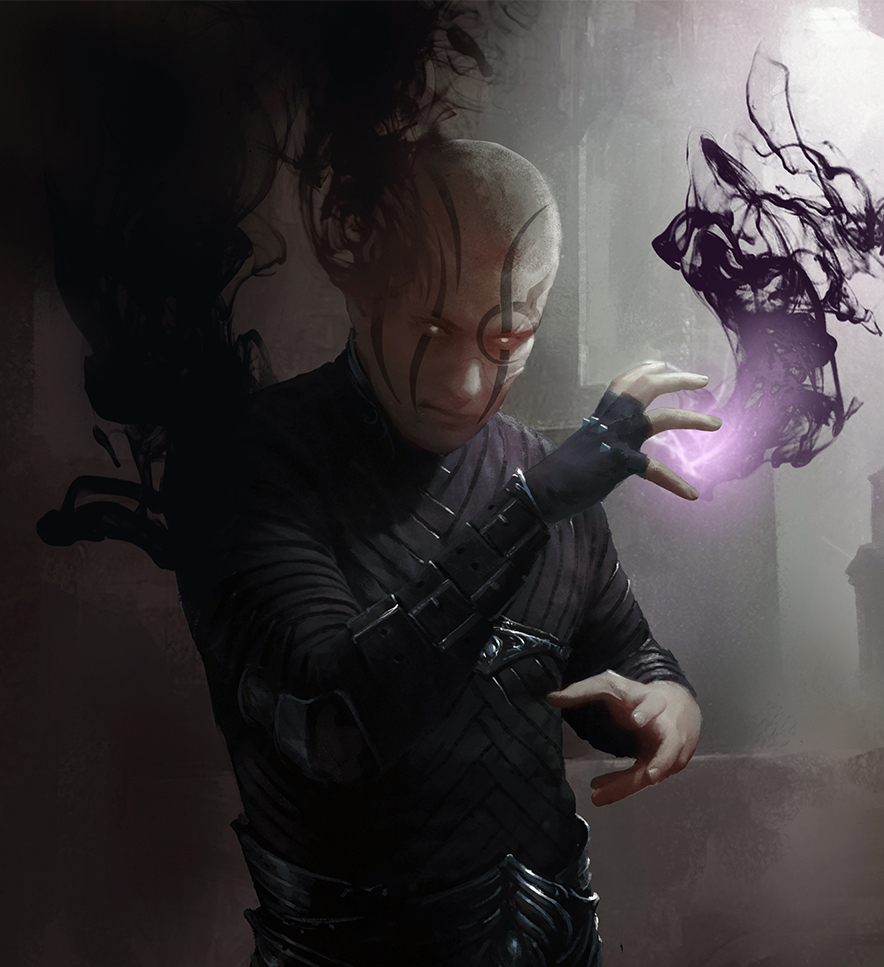 Risszar was born to goat herders in the razed mountain lands of Kemaccus. The Barbarian Tribes and wild animals were a constant threat. The Legion was a necessary occupation. Loss was a part of life, happiness a fleeting whiff of smoke. Risszar's first friend was a girl. They used to play together when both their parents combined trading goods for the traveling merchant. Word reached them that their friends' farm had been ransacked by the wild men. He never heard from her again. The next week he lost his favorite goat. His father lashed his palms bloody to engrave the importance of keeping hold of what's yours.

One day, a group of Legion men came to the house for shelter. Just following orders, they said. They slapped Risszar unconscious. He awoke to find the soldiers ransacking the house, dragging off his parents' bodies and laughing. His father's death was quick and clean, his mother's was not. Just following orders. Risszar eventually made sense of his hatred for those men, but was taken with them nevertheless with nowhere else to go.

Risszar was a rebellious boy with a taste for mischief, and his gifting with the Myst only provoked him to further devilry. He disappeared with ease when the Legion men talked of recruitment to the citadel. Though the Legion fed and housed him, he spied and stole just for the thrill of it. Risszar witnessed all sorts of debauchery. Only one man always had an eye on him when no other could, an apothecary mage. The old man always new what Risszar had been up to. It was as though he could read all his thoughts, and delighted in ridiculing and humiliating Risszar. It became a game for Risszar, to outsmart and outmatch the bitter old man. But their relationship was more than that. The mage taught Risszar many things. But in the end, Risszar was a disappointment. Despite his promise, Risszar eventually besmirched his mentor's name. He was stripped of all possessions and title. He blamed Risszar and foretold of his endless suffering.

After his falling out with his mentor, Risszar left for Nissil. What with his habitual thieving and gifted delinquency, he inevitably fell in with The Adventurer's Guild. He wanted nothing more than to become a full fledged member, recognized by his peers. But they only saw a kid they could exploit. So adventurers and mercenaries used him as they liked, the local stray, a mangy mutt to do their dirty work for scraps or nothing at all. But Risszar learned from them, stuck to them like their shadow. He nicked his pickings whenever he liked. He even stole himself another man's woman, when he was the age to want for one. But he wanted for another woman, and his fancy left him when she found out. He hand't learned the fault in bragging yet. Nothing gained nothing lost, nothing lasts anyways.

Taking odd jobs on his own now, Risszar had managed to get his hands plenty dirty. A secretive man who said he represented a larger order had hired him to slit a few throats. He'd even taken to one particular payday regularly when in a pinch, a researcher who'd grown tired of picking apart corpses payed handsomely for a live specimen. But it was more than the coin that called him back time and again. It was the man's mind. Through the torture, Risszar learned more about his gifts than ever before. And afterwards, he'd be allowed to pick the man's brain and turn through his books in exchange. The man's knowledge of the Empire's research into the Myst was vast, and his newest friends were asking him to prove his loyalty. So Risszar stole the man's Imperial ledger as proof of his fealty. It was a start. But Risszar had burned his biggest and most reliable cash cow.

The Ebony Order was not a phrase he'd heard before, nor did his new friends share much information about it. They did however know much about him, and Risszar found their version of his life quite convincing. He still wasn't sure if their order was real, or if it was just the mad dream of these deviants. But the both of them seemed to agree that they were all he had. And indeed they seemed a perfect fit. Their only directive was to sow discord amongst the Old Empire, to bring it to its knees. They also dangled a personal treat before his eyes, the official order leading to his parent's deaths. True the general didn't exactly specify rape or murder. But that's all the Empire is good for anymore, ruining its own. Risszar resolved to help the Empire in its efforts and act as the instrument of its decay. Death to the Empire.

Risszar both loves and hates himself. He is arrogant in his abilities, vain and romantic with himself when alone. But he fights with an inferiority complex in society, and loathes his propensity for missteps and transgressions. He is contentedly resourceful, available to almost any avenue that takes him to his destination. Still, he is drawn to connection and relationships; he simply just inevitably self-sabotages or makes a blight of things. He has an odd association with consequences; they hurt him, but they just don't apply to him. Death often is his business, but life is of much more interest.

Shadow Magic: Risszar is able to manipulate both himself and his surroundings in the form of smoke and shadow. He can create this effect on his own or incorporate his pouches of alchemical powders. He can teleport short distances through ash clouds or a shadowy myst, even through walls as long as there is even a tiny crack to slip in through. In his gaseous form, he is incorporeal and as fast as a gale, but also weaker to fire. In his shadow form, he can disappear into and traverse any defined shadow or flit about freely like a swarm of gnats, but is weaker to electricity. He is able to mimic the form of almost any creature in shadow form. He can also create small shadow weapons that can penetrate tissue and cloth, but not thick leathers and metal armor. He can also create shadow wraiths that can travel the length of a small town on their own, able to follow simple commands and wound targets with the same capabilities as his shadow weapons.

Combat: Risszar is a natural born fighter, trained in several arts throughout his life and career. He is practiced with all manner of weapons and tactics. Knives are his forte.

Apothecary: Poison, in all its forms is Risszar's hobby. Through alchemy, Risszar practices toxicology. With limited resources, he has managed to kill with several types of poisons and has begun building a slight resistance to the most common poisons. His botanical knowledge is lacking and he's only learned of several poisonous creatures, but he knows his way around a healer's stores. And as a result of his study with poisons, he has also picked up a rudimentary knowledge of healing as well.

Side Effects: Due to the nature of his Myst connection, his hobby, and subjected experimentation, his hands have developed minor tremors. He treats himself with various herbs, brews, and liquors.