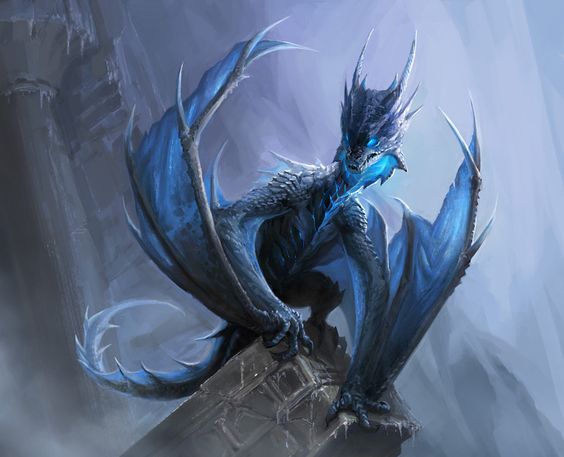 Biology and Breeds:
Wyverns are a highly adaptive species and within a couple of years of inhabiting even hostile environments can evolve the necessary traits to enable them to survive. Pascal's Blue is most common in cold mountainous environments where they have adapted a specialised organ that enables them to regulate their internal body temperature by storing pre-heated water, as a result, most Pascal's can be found roosting near hot springs.

Pascals Blue is most easily identifiable by their dark grey scales and icy blue wing membranes which extend down their back and tails. The tail-like most Wyverns ends with a barbed tip usually coated in a teal ichor. If threatened poison may gather in specialised glands in their throat giving a baleful blue giving an almost luminous appearance.

Generally, it's not possible to tame Wyverns, although some particularly powerful individuals may use them as mounts they do not restrain themselves from base instincts. As such you will not see a 'tame' Wyvern in any populated area and those who keep them tend not to have the best interest of others in mind (think evil overlords).

Wyverns are extremely aggressive and territorial creatures and 'love' doesn't conquer this most basic of instincts. Males will typically attempt to force a female into mating with them, with most attempts failing and ending in the death of her potential partner. When one does eventually succeed the male will depart in search of another while she broods using any carcasses of fallen Wyverns to help sustain her. She will typically lay several clutches amounting to roughly 4-5 eggs.

As a result of this practice, it's rare to encounter many males who exceed the age of maturity and those who do tend to only grow more powerful with age.

Temperament:
As previously mentioned Wyverns are extremely hostile and feral creatures, they view anything smaller than them as potential food sources and are constantly fighting each other for dominance. This gives the impression of a savage mindless beast but such an underestimation can be the folly of any adventurer who challenges one, Wyverns are predators and will do whatever is necessary to gain the advantage over a foe. Outnumbered they may seek to divide and isolate their foes or use hit and run tactics to let the venom do most of the work for them.

It's noted that all species of Wyvern have a peculiar habit of tending to their tails, the barb tip especially. This is often mistaken for 'cleaning' however it is the method by which a Wyvern applies its venom before a hunt.

If a Wyvern is sufficiently damaged or wounded it will usually attempt to retreat as opposed to fighting to the death, this instinct is true of most Wyverns.

Diet:
Wyverns are Carnivores and will eat pretty much anything they can sink their teeth into, given the opportunity they may even raid unguarded Gryphon or Dragon nests in attempts to recover eggs. Additionally, many species are suitably adapted to eat carrion, Blue Pascals included.

Capabilities:
Many people who observe Wyverns may mistake them for dragons, this carries with it a fear factor that may cause people unfamiliar with them to overreact or take precautions unnecessary or contradictory to their survival. In the case of Pascals Blue, they can use their claws for climbing and clinging to rock faces. While lacking any breath weapons they also possess a potent bite and will happily attempt to eat sufficiently smaller creatures whole if it would end a potentially dangerous fight quickly.

In terms of mobility, most Wyverns lack the necessary wings to fly long distances and most use them for gliding only or a quick escape mechanism if overwhelmed. While quite slow on the ground they are nimble capable of leaping great distances and possess the physical strength to overpower most foes smaller than them. Their natural weapons are usually limited, however, to a bite and venomous sting. The Pascal Blue venom works by interrupting the nervous system causing the subject's reactions to slow significantly left untreated it may cause permanent damage in the form of paralysis. Thankfully, poultices and the most common curvatives are effective at combating the venom.

Defensively Wyvern scales are not as strong as a dragon, they are usually compared to the likes of Breastplate.

They are a relatively new threat appearing sometime after the Myst Crisis leading some to believe they are the result of a mutation in an unknown reptilian species or perhaps accidentally unearthed as a result. Regardless, few know of them and many would assume sightings of such a creature to be a dragon.

Wyverns are commonly mistaken as dragons with appearances similar enough to confuse people and predators alike it is as much a defence mechanism as it is a tool. That said, Wyverns are relatively rare with their temperament resulting in populations waxing and waning constantly; this combined with the fact they usually reside in the most inhospitable environments ensures encounters between Wyverns and kingdoms is extremely rare. When it does occur, however, left unchecked they can have a devasting impact on local wildlife populations.

Some adventurers who have slain a Wyvern mistakingly believe themselves to have killed a young dragon.

Pascals earned their name for the first researcher to encounter and document the species, while he survived the encounter his companions did not and the venom had left him paralyzed.