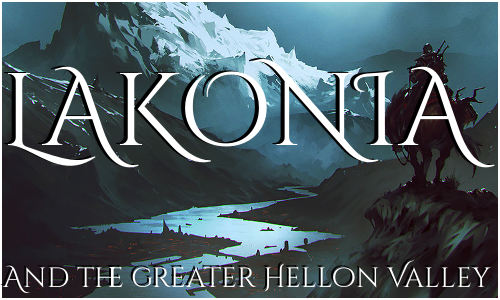 The Hellon Valley rests in the crest cleaved through the Taygetus Mountains range, toiled away over time by the River Eurotas. It rests in the lower center of Venisia.

Lakonia sits directly at the base of the mountain range, and in particular Mount Gaia, the largest peak in the immediate area. The control of the city-state exists through the entire greater valley area, but only marginally into the mountain range to the west. A few forts exist in strategic positions among the heights.

The entire valley itself rest upon a latitude that is temperate, to slightly arid. The winds that come from the Coast of Orestes to the east tend to help keep the area generally in favorable weather, even during the summer months. There is almost never any kind of snow in the valley itself, with only the far interior of Lakonia even getting to chilly weather.

The trip to the heights of Mount Gaia, or the surrounding Taygetus find a change into the more drastic cold that has kept stave off any further westward expansion beyond the city of Lakonia.

The base of the valley floor is generally fertile, and provides arable land for the cultivation of olives, barley, and grapes. Sparse forested areas cover the thin, rocky areas that cover the foothills of the Taygetus Range.

A huge boon to the Lakonian economy is a large granite mine that rests in the mountains towards the south eastern reaches of their territory.

The city of Lakonia has complete economic control over almost all of the small cities in its territory. Due to conflict at the shift of its sovereignty towards the Old Empire, there is a rigid class system that exists in the Hellon Valley. The two classes are locally called the Klideans and the Nikademeans.

The Klideans are the warrior and ruling class. From a young age, their male children are enlisted into the military that is generally considered a lifetime conscription. They spend their whole lives becoming stronger warriors, and training to protect their country.

The martial society of the Klideans is propped up by the serfdom of the Nikademeans, who are born into a life of farming, crafting, or other forms of production. Due to this class system, the Lakonians are very hestitant to march to war, due to fear that the Nikademeans will seize control of their city during the course of a lengthy war campaign. The Nikademeans are considered little more than property, not to be abused, but no sense of citizenship or belonging to the greater civilization.

Among the city of Lakonia there is a fairly open history of democratic discourse among the Klideans. A group of five Ephors preside over affairs of the state, and are able to call forth a challenge to any edict made by non-elected officials. There are five districts, and the Ephors are elected through a simple majority of the Klideans within that district.

Every Klidean is able to attend all official meetings, and voice their opinions during the proceedings. The Ephors are required to attend a town hall for the citizens of their district once a month, and can be immediately ousted if they're seen to be in dissent of the majority. The Senators and Governors of the Hellon Valley are not from the valley and do not even call the are by its native name. To the Old Empire the Hellon Valley is known as the 'Daimecians' due to a miscommunication millenia ago. These factors, along with general tension from the beginning of its union has led Lakonians as a whole to distrust the Old Empire, and they try to mitigate any government involvement with their mainland.

The most powerful non-elected official is the Steward of Lakonia. This is a direct descendant of Euklideseus that is chosen by the sitting Ephors when the last Steward has died from qualified candidates. They are considered the chief of state with the power to pass or fail edicts, declare war, and allocate resources in times of war. Any single Ephor can make a challenge to the decision of the Steward, however, it takes a unanimous vote to overturn his decisions. A majority dissent to a Steward will enact a public hearing to gauge the opinion of the Klideans.

Political unrest is rippling through the Valley of the Hellons as a challenger to the line of Euklideseus has arose, and the known history of their peoples has been called into question. A woman claiming to be the first Pythia in a thousand years has been seen with him.

Lakonia is officially under the sovereignty of the Old Empire, along with all of its tribute cities. There are many Klideans that have begun to talk of splitting off from the Old Empire. The Nikadomeans see the Old Empire as a negative force, and with nothing to do with it.

The city of Delphi is not largely important in terms of commerce or production, but it does hold a cultural and once a significant political impact on the entire Hellon Valley. Delphi was once considered the center of the world to the Hellon people. It is where they believed their first king, Orestes, fought against a monstrous Shroud beast in the form of a snake named Pythos. The Temple of Orestes at Delphi was built in his honor, and it is the place where the Pythia once lived. She was an Oracle, that was said to have never given an incorrect prophecy. She would not always answer the question brought, but the words she spoke always came to pass. The last Oracle of Delphi was said to have died at the hand of an assassin sent by Nikademos.

In recent years it has come to light that this oracle's death may not have been what it seemed. A new Pythia is claiming to have been born, and is travelling with the Nikademean rebels.

Gytheion is the second largest city, and it is a large port. The port itself is massive, and the entire city is built around the functions that are necessary in the area. There is a large shipyard that builds the finest triremes in all of Venisia.

There is an old ruin near the peak of Mount Gaia that once hosted religious ceremonies and sacrifices. Since the supposed death of Madea, the alter is no longer being used. It has fallen to a state of decay, but it still is visible. In 3053 UYC there were reports all over Lakonia of a massively bright light shining from the Pythian Alter. Further investigations could not determine the source of the lights.

The Abandoned Mines of Orestes

The Mines of Orestes were once the pride of Lakonia, cut deep within the Taygetus Mountains. They were the source of great wealth for the King. As the mines went into greater production, the use of the Shroud become more and more common as a method of boring into the rock. Some say that the men dug too deep, others say that they dug so deep the Ring Ore no longer held back the shroud at all, and others still say that the constant use of the Shroud in the pursuit of pure greed corrupted the walls of the mines.

The Mines are still in use, but it is no longer by men. Grotesque figures wonder about the ancient, twisting corridors of this forgotten realm. People have entered since the closure of the mines, fashioning themselves a hero. They rarely come back, and when they return it is to a life of crippling madness. The natives around the area convince themselves that the men who once worked the mines died long ago to these monsters. None of them returned, so that had to be the case.

No one mentions the groans of old names; the cries that sound like pleas for mercy coming from the mountains on a still night. No one in Lakonia wants to accept the fate of the men who dared dig too deep, and were cursed within the mines.

The Battlefield of Argos

There are rumors that the old battlefield of the great battle near Argos are home to a forgotten tomb. No one knows how to enter it, or who it is for; but the doors to it are said to only be visible on the winter solstice.

The Outpost at Knossos 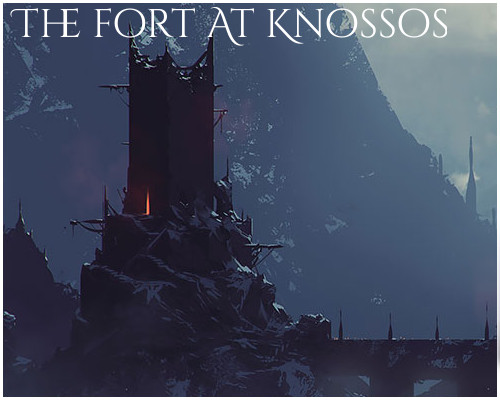 The Fort at Knossos is a large outpost that is used as a forward scouting point to spot movement across the Taygetus. It is set high in the mountains, and the soldiers stationed there are usually younger officers in training to get experience on their own.

U.C.Y. 750 - In the aftermath of the Venistian Wars, a group of people known as the Lakoans settled in the greater Hellon Valley.

U.C.Y. 1,000 - Still in its infancy, the city of Lakonia begins as a few roughly constructed huts scattered around the river Eurotas.

U.C.Y. 1,200 - Orestes unites various tribes in the Greater Hellon Valley, and takes the throne as its first King. He begins the mine of the Taygetus Mountains to extract gold and silver. A great building project is enacted to build the infrastructure for a great city.

U.C.Y 1,336 - The great building project begins, and Lakonia is in an age of great expansion and wealth.

U.C.Y 1,602 - King Deimos takes the throne. Shortly after the Old Empire looks towards annexation of Lakonia.

U.C.Y. 1,640 - 1,642 The Greater Hellon Valley is thrown into a huge civil war at the prospect of becoming part of the Old Empire. Many people say that there has been deception involving Euklideseus, and he takes martial control of the area. The civil war last for approximately two years, and in the end the side of Euklideseus reigns over. He banishes all the descendants of Nikademos, and those that supported them to a serf class. Restructuring of the government is recreated around this idea of the Klideans being a ruling class, and a warrior society.

U.C.Y. 1725 - The Mine of Orestes is completely abandoned due to Shroud influences. Attempts are made to completely seal it off, but are mostly unsuccessful.

U.C.Y. 2025 - Continued growth sees a lulling in the City-State as they become complacent with the status quote.

U.C.Y. 3053 - A bright light is seen at the Alter of the Pythia. Many people go to investigate, but no one is able to determine the source.

U.C.Y. 3054 - There is a group of people that have begun to see the lighting of the Alter of Pythia as a sign of the return to the old ways. Many people believe a new Pythia has been born, bolstered by someone's claim to be an oracle. A rebellion forms that demands Lakonia succeeds from the Old Empire. The Steward begins to fear another civil war.

U.C.Y 3066 - A peasant named Archidamos opens the tomb at the Battlefield of Argos, revealing it to be the lost tomb of Orestes. In secret, the sons of Nikademos had added to the old tomb to bury his body alongside the old tomb. Archidamos proves to be a powerful Magi by conjuring imprints of Orestes and Nikademos. With the support of these imprints, he is able to recruit the rebels. The oracle that has been rumored in the Valley joins his ranks.

U.C.Y. 3038 - Archidamos leaves for Arshaka in an attempt to plead the Red Queen to honor his claim to the throne of Lakonia, and help him overthrow the Euklidean Dynasty. Current year. 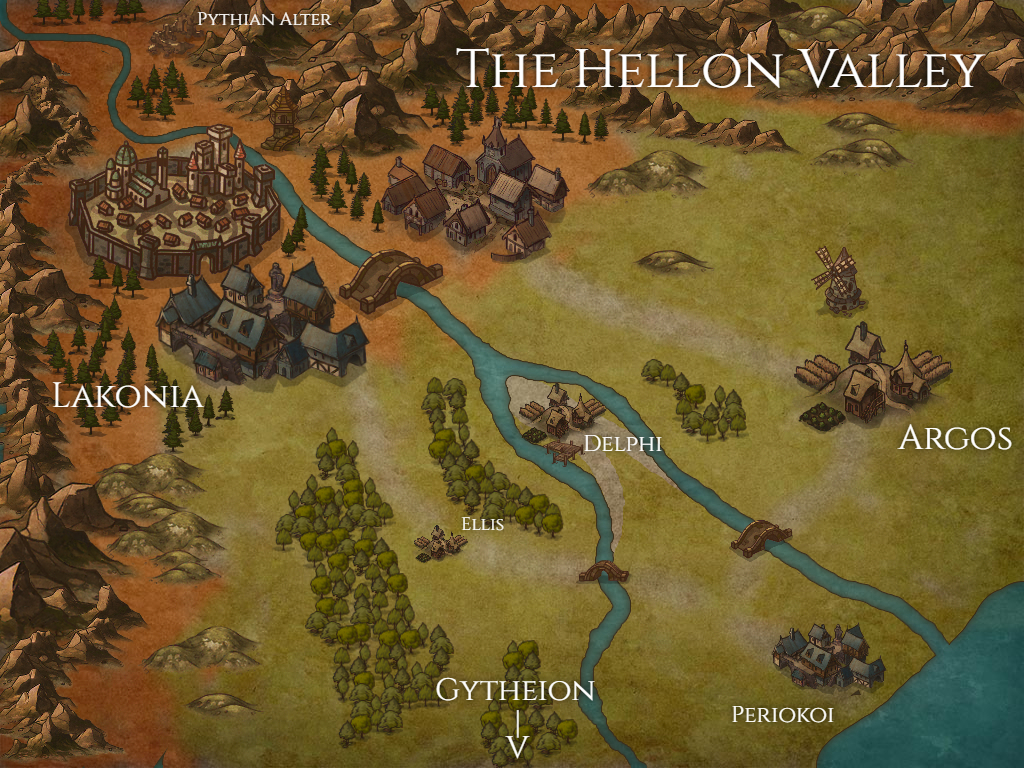 *Map is not meant to be to size. It is simply to provide a general idea of the location of various points of interest ​

This was fun to read. Love it!