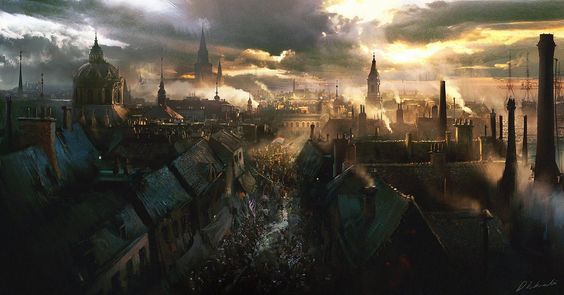 Arhsaka​
A storm was brewing, a light rain had already started when Elaith had entered the city. This was not where he wanted to be, so close to home, so close to his father. He had been sent her at the request of one of the noble houses to assistant them with magic as a tutor of sorts. He hadn't been told anything else. The Order let him stay, not wanting to show they could be bent by powerful families, but the constant pressure his father had placed on them to expel him had been enough to at least keep him from advancing on to more exciting tasks.

His staff clicked along to stone road as he made his way through the town to where he was to meet this student of his. He was expecting a child, but he hadn't been told anything about who or what he was actually doing. Maybe this was another test? There was no way to know. For now, he would simply do as he was told.

Rain fell against his hood as he approached one the large manor he was told to report to he knew the house, having only grown up a short distance away. He wasn't aware House Ischyros had children who would have need of a tutor. He continued up steps that were already beginning to grow slick with rain.

He knocked on the large door, pulling his hood down. Elaith was wearing simple clothes, but they were well made. His arms were wrapped, covering the arcane tattoos that lay underneath. Just because the Order had stopped helping him progressed further didn't mean he stopped learning. He taught himself deeper, more intricate magic. He had even journeyed to the Shroud several times. It was breathtaking. Soon he would prove himself to them, they would see how much potential he had.

An old attendant came to the door. Elaith smiled, speaking in a fine accent that didn't quite fit right with his simple clothing. "I am Elaith Ranitheil. I have been summoned here," he said not really sure who he was supposed to be meeting. "Ah. Yes. Come in. Come in." the old man spoke gesturing he comes inside. "Wait here one moment, please," he said before making his way into another room.

He looked around the foyer of the magnificent home. He had grown up in a place just like this and had been trying his hardest to get away ever since. A task he felt like he was slowly failing. The house had been quiet for a few days. Her father and his new wife had left for some magistrate business outside of Arhsaka leaving her alone. This might have been a welcome respite from the rigorous training that her father placed her through daily. He was determined to unlock whatever potential it was that he saw within her. She didn't protest, didn't fight it, quite the opposite in fact. She tried her hardest to prove herself, to be what he wanted. Yet still, he wished that she'd been the one taken into the shroud. He reminded her that her twin would be so much more advanced than her. They had shown true skill when they'd opened the shroud portal at fourteen if only the inhabitants had taken Phaedra instead he'd have been left with the competent heir.

He'd told her that while he would be away, she couldn't slack off in her studies and in fact, someone would be coming to the house to assist her. She didn't know what exactly that meant except that she would possibly have a tutor during his time away and she wasn't quite sure how she felt about this. Would this be just a babysitter, meant to make sure she continued her studies or would this be someone truly capable of teaching her something new? A new method or a new process. A knock sounded on her bedroom door, "Your tutor is here miss. He's awaiting you in the sitting room."

Phae stood and brushed out the non-existent wrinkles in her simple, yet well-made, blue gown, she was surprised to find that she was nervous. After her twin disappeared into the shroud, she rarely saw others. She attended important festivals and events and the like as it was expected, but with her lack of progress magically her father probably told everyone that she had gotten too ill for being about in public. Then after he'd discovered the amulet, he'd kept her secluded while he focused on improving her skills. So it was exciting to be seeing another person in a nonformal setting.

Heading down the stairs, she opened the door to the sitting room and noticed her guest. He wasn't too tall, though definitely taller than her. His clothes looked handsomely made, which made her think he was wealthy. "Welcome. I hope I didn't keep you waiting long." She said announcing her presence. "I'm Phaedra Ischyros, I don't believe we've met." However, as she said the words and finally got a look at his face, there was something familiar to it though she couldn't quite place it.

Elaith smiled as the woman came in the room. He bowed slightly at the waist. "Of course not," he said warmly even though she had kept him waiting for some time. It was all apart of the game the nobility played; she was likely unaware she was also playing it. Besides, he was in no rush, and no the longer he was here to less time he had to worry about avoiding his own families' home several streets down.

"Elaith Ranitheil," he said in response. "It is a pleasure, my lady," he said. He was sure they met at some point, probably at some party or ball he had dreaded being at. The whole thing was exhausting to him; it wasn't that he didn't enjoy a good time; it was the fact that everyone was so fake. Everyone tried to find out dirt on everyone else while pretending their own life was perfect. He couldn't stand it.

Maybe she wouldn't recognize him either, that would fine with him, but he made no effort to hide his identity "How may I be of service?" he asked inquisitively. He had research to get back to; he would never get promoted if he didn't prove himself. Though, with his Father intervening, he likely would never be promoted anyway.

For now, he focused on the woman who had summoned him for assistance. He let that distract him from his frustrations for the time being.
Last edited by a moderator: Jun 27, 2019

Didn't he know why he was here? She thought surprise flickering briefly across her face. "I thought you were aware. I believe my father was asking for your assistance with my shroud training while he was away." She said after the moment of hesitation.

She wasn't really sure what it was that Elaith specialized in, but it was clear that it was enough that her father trusted him enough to teach her. So she'd just have to trust his plan, whatever that was. Her father would never trust her with that much information even. She moved further into the room and took a seat in one of the high-backed, plush chairs and waved for him to take the other across from her as the doors to the room opened again. One of the maids came in with a laden tray, light refreshments for the afternoon as the rain began to pound harder at the large floor to ceiling windows that overlooked the expansive garden. This was her favorite room to be in, looking over the garden, but now the gloom of the storm seemed to press inward.

"Perhaps you can tell me what is your specialty?" She was curious as to what it as that he could teach her. Currently, the only magic that she was skilled at revolved around the shadows that lingered in the corners and in the hidden places. She had a connection with them, could feel them, almost like they were animate or perhaps it was all just in her head. Sometimes it was hard to tell.

He coughed slightly; she was right; he did know why he was here. "I.." he said pausing for a second before recovering "Of course, you are quite right. I will be honest, being back in the Capital after so long as me a bit out of sorts." he said with a weak smile.

He followed her further in the room and lowered himself into one of the oversized chairs. It was the sort you slowly sank into, becoming more and more comfortable. They both sat, overlooking the garden and the storm that picked up outside. He loved storms; it was something about the energy that drew him in, the sheer pour of nature. Perhaps that is why he had always been drawn to electricity magic

The maid came in, carrying a tray of refreshments and placed them on the table. He smiled and nodded to the woman as she lowered the tray. He had grown up with the wealth of a significant Imperial house, surrounded by servants, but he had also lived as a low ranking Planewalker, a student, for several years. It was a humbling process; one Eliath enjoyed more than being served. He took a small pastry off of the tray and took a bite from it, he wasn't particularly hungry, but it was the polite thing to do.

He crossed one leg over the other as she asked what types of magic he dealt with. "Mostly elemental magic, specifically lightning, though I know my way around most of the elements. I also dabble in energy manipulation," he said, finishing the small pastry. "Though I have done studies in other areas as well, is there something specific you are looking for assistance with?" he asked, tilting his head to the side slightly. Lightning streak across the sky as drops of rain rolled down the large window in front of them.
You must log in or register to reply here.
Share:
Facebook Twitter Reddit Pinterest Tumblr WhatsApp Email Link