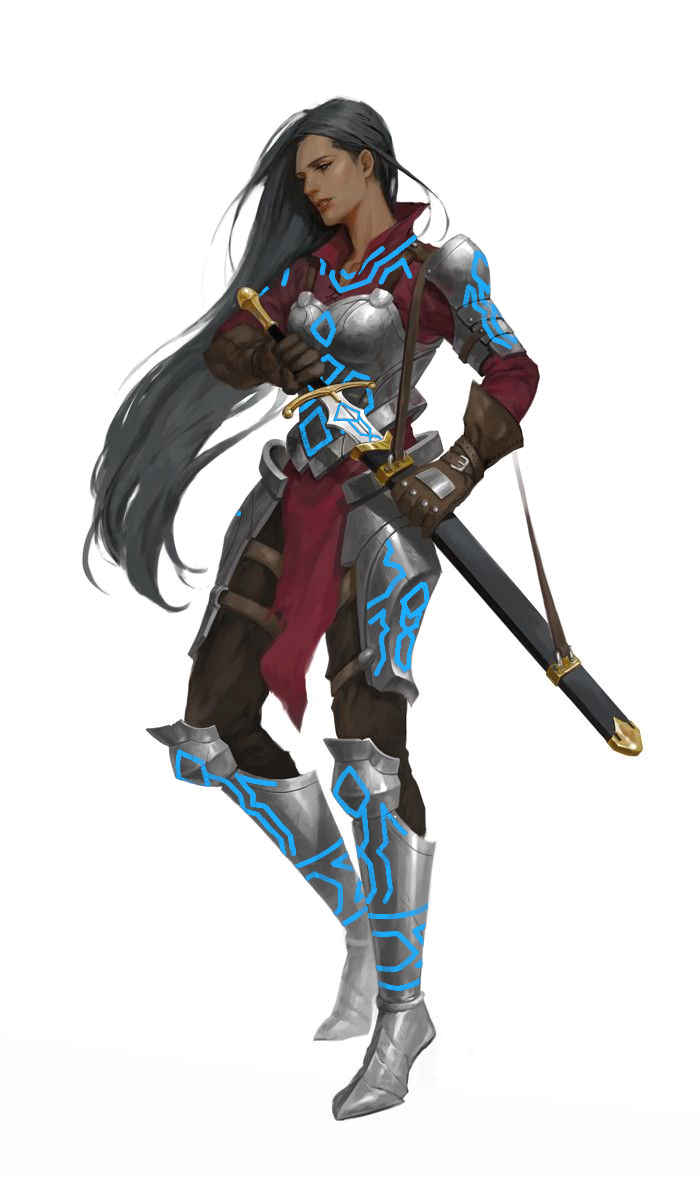 Danielle Bourbeau was born to a family of farmers and herdsmen, high in the foothills of Leore. She did as is expected of a farm-born child - laughing, playing, feeding chickens - until her tenth birthday, at which point the markings flared to life. At first her family was shocked by the stark blue lines. They couldn't be scrubbed away, couldn't be covered by paint, mud, or cloth. Instead they would appear atop their coverings, as though demanding to be witnessed. Eventually, they became a simple matter of course and life moved on.
As Dani matured into a fine young lady, her growth became unexpectedly extreme. She had always been tall for her age, but by the age of fourteen she had grown nearly taller than her father, who was himself a man of some stature. Her chores turned from the feeding of chickens to planting, harvesting, and tending cattle, just as her father and older brothers did. Before long, they discovered her strength, as she wrestled a raging ox to submission.
Her reputation quickly grew amongst the nearby villages as she proved a kindhearted and helpful soul, often ferrying supplies from one town to another, stopping along the way to scare predators from the grazing fields or help repair broken cart wheels. By the time she reached full adulthood, she was well trusted by all within the small communities she frequented.
Her life remained peaceful and idyllic until a lean year struck Leore and a band of brigands set their sights on the well-stocked granaries of her home town. While others hid, Dani stood tall. Armed with nothing but a long-handled post maul, she beat back the invaders and protected her people.
Tales of the tall, rune-marked young woman with a body of iron and a will of steel raged through the rural communities and it was decided by the village that her fate lay beyond the tending of fields. With what wealth and resources they could spare, the people of her town gifted her with packs, water skins, blankets, tentpoles, and all the things she would need to travel far from home.
The greatest of these gifts came from the village's elder, who unearthed from his stores a battered set of half-plate armor and a long, heavy sword. While not ornate or decorated, they were sturdy and had been fitted to her frame. When she put the armor on, her markings shone brightly on the freshly polished steel - looking as though etched by a master - and then she took the sword in hand.
For the first time in her life, something deep in her heart clicked into place, and markings much like her own emblazoned themselves upon the flats of the blade. This was to be her calling - wielding this blade, wearing this armor, in defense of those who could not defend themselves.

Dani is in love with the simple things in life. She takes genuine joy from walking the countryside, seeing the vast and varied lands of the Old Empire. Her driving motive is to help the people in any way she can, whether that be by defending them from bandits, standing against tyrannical landowners, or simply hoisting bales of hay. Though she could likely qualify as a high-ranking soldier in the armies of Leore or the Empire proper, she has never sought out rank or title. Instead, she relishes her status as a representative of all the common folk she meets.
So pervasive is this simple-life mindset that she can rarely be found fretting over politics, religion, or the nature of her own future. She's kept herself too busy smelling the roses to bother with her own worry or strife.

Swordsmanship: Though she has never received formal training, over her years of wandering Dani has taught herself the fundamentals of combat. She has no real grasp of swordplay, but her strikes are swift and accurate, and between her height, strength, and instinct her stance is nearly unbreakable.

Champion of the Weak: Whatever the nature of her enchantment, Dani's strength is significantly greater than even her considerable size would suggest. It would not be at all strange for her to hold her ground against a charging troll.

Defender of the Innocent: No ordinary equipment should be capable of withstanding Dani's might in regular use and yet she has kept the same sword and armor throughout her travels, never stopping to sharpen the blade or pull dents from the plate. This is because a portion of her blessing is extended to the equipment her markings adorn, bolstering their durability far beyond the norm.

Tyrant's Bane: For better or worse, Dani is fated to challenge great foes. Some function of her blessing has an effect on the minds of those who stand against her, encouraging the weak to flee from her fury and demanding that the strong turn to face her defiance.