Location: Bellestuaire is a coastal province which is located rather centrally to the east on the western continent. The state is on the smaller side of the scale in regards to medium sized provinces but still has enough land to house farmers, foresters and fishermen. The landmasses of Bellestuaire are divided in two as one of the major rivers runs straight through the area from the west until it finally meets the ocean to the east.

Climate: The climate of this region is temperate and the inhabitants have been fortunate enough to be relatively sheltered from harsh winters and dry summers. Much to the farmer's dismay, rain is not as common as one might expect in a coastal area but the fertile lands and temperate climate provides for long harvest seasons and allows for relatively efficient agriculture.

Primary Terrain: While rolling fields cultivated by the province's farmers and bright forests dominating the inland, long sand beaches with a fair amount of rocks and occasional cliffs characterize the ocean coasts of Bellestuaire. The river which runs through the province doesn't have any fixed bridges in order to allow for slightly larger ships to pass through and large parts of the river's sides have more or less well developed roads. There is a notable lack of larger mountains or hills in the area which can be described as relatively flat but there are still numerous small creeks which runs through the lands to either meet the ocean or the river.

Government: While originally a merchant republic, Bellestuaire fell under the control of the rich and influential Vouverne family about 110 years ago. Next to none remember nor know how the transition of power of happened but the most probable explanation is that they won a string of elections until their rule was taken for granted as there are no records to show any particular unrest or violence from the period. By now, elections are no longer held and the Sovereign, which is what the leader title is, tends to stay in power until death. Succession is determined by seniority which means that the province rarely remains under the control of a single ruler for long as the advanced age of a new leader tends to limit the length of their terms. 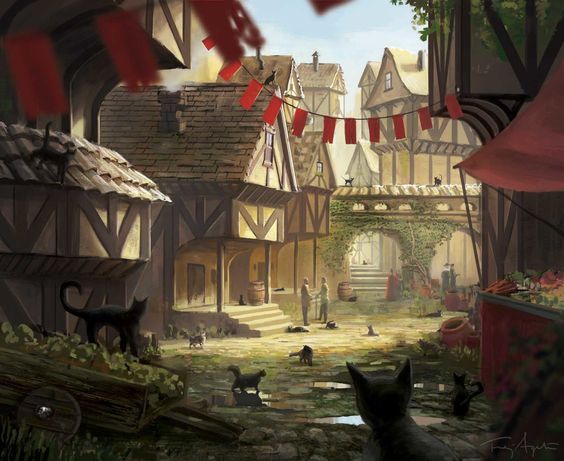 The succession by seniority has meant that both loved and hated leaders haven't been able to remain in power for very long. But instead of having the competence levels of the Sovereigns remain on an average levels overall, the elders which live long enough to have the power fall into their hands are can often be considered to be wise and a far throw from reckless. From a positive point of view, the Vouverne's can be described as economical but from the other perspective, they can be seen as greedy. Regardless, the various rulers of Bellestuaire have often cut down on expenses which have affected the law enforcement, health care but also the Sovereign's own court and funds going to the Vouverne family themselves.

While the province is a far cry from rich, the people are still relatively satisfied with the current state of things. The rulers of the state have used their lifelong connections and a fair amount of money saved from the expense cuts in order to reach beneficial agreements with nearby provinces where aggression between the participatory states is forbidden and aid is to be provided to the other states in good faith whenever the need and opportunity arises and it is within reason.

Affiliation: Bellestuaire is loosely affiliated with the Old Empire as all provinces are. In practice, however, it is more closely tied to its fellow provinces than anything else.

Bellestuaire has traditionally been a fishing village and a hub in witch people from nearby towns and villages have traveled to sell their goods. The harbour, while originally designed for simple fishing vessels have slowly developed towards the more commercial side of things with wide streets and loading bays along with primitive cranes. The residential buildings by the harbour are among the nice ones in the city and often belong to successful merchants or prominent families of proud fishermen. The daytime activity in the area is almost always high as ships leave for the sea to fish or arrive to drop of wares. 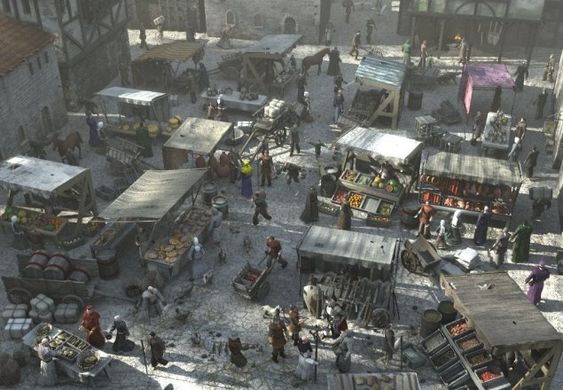 The most active part of the town is the eastern market square which is located just a few buildings away from the harbour. This is where the largest part of the commerce in the city happens as people from the entire province come to sell their wares. Ever since the province spent more effort on becoming more involved with its neighbours, merchants from other provinces have even begun visiting the city instead of merely passing by. Many of the cities narrow streets and alleyways eventually lead to this market which can easily be described as the province's heart. On a typical day, the stall owners can be heard hollering out their offers while animals and playing children can be heard in the background. 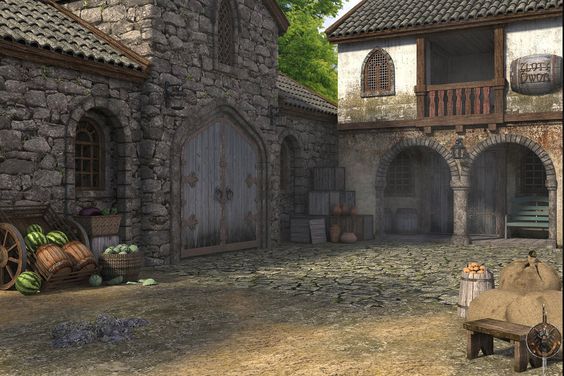 While the Barracks and headquarters of the City Guard might not be much to see, many of the more rowdy visitors will get to see it regardless as this is where prisoners and drunks tend to end up. The buildings are downtrodden and haven't had any maintenance in years, something which is also true for the City Guard. The building used to house a strong and proud defence force for the province but has been slimmed down in size throughout the years and is now not capable of doing much more than acting as a police force - Bellestuaire instead relies on its diplomatic ties and relative insignificance to ensure peace and security. The guards have assumed a make-do-with-what-you-got attitude towards how they handle their resources and will not shy away from unconventional methods when they are deemed as good and efficient. While most guards are relatively lightly armoured, they also have a more specialized force which is deployed outside of the city in order to ensure peace in the entire province as well as dealing with tougher problems inside the city itself. This force consists of people from all ranks and tend to be slightly better equipped. Learning on the job is very common for the Bellestuaire City Guard. 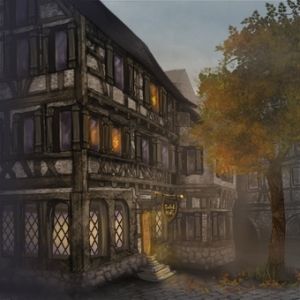 During the later hours of the day, Bellestuaire slows down markedly with the vendors closing and many visiting merchants leaving. The small guard force has trouble dealing with thieves, robbers and gangs which results in many locals avoid staying out too late. But, while the streets mostly goes dark, the lights from Perrine's Inn shines brightly throughout many of the night's hours and is a popular place for travelers and locals alike. There are several rooms which visitor's can rent for the night on the second and third floor while the first is reserved for patrons still wanting some food and beverage. There have been rumours that the owner of the Inn have connections with people from Nal Akima and have a stash of their ale hidden away somewhere. 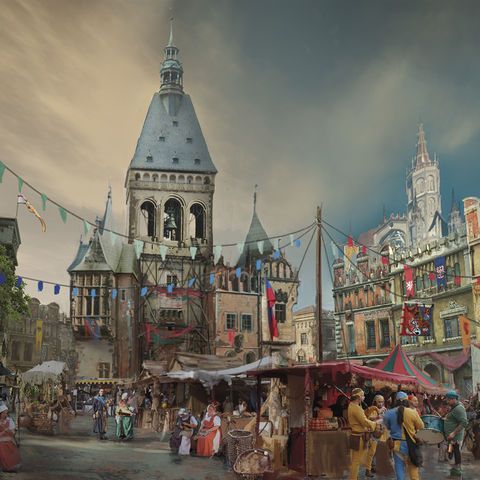 Most of Bellestuaire's buildings are wooden and limited in height, the town hall is a grandstanding behemoth in comparison. Instead of narrow streets and alleyways, the area in front of the entrance is a clean and open plaza. Primarily made of stone, the town hall has multiple floors capable of housing a large administrative staff and a grand bell which can be rung in emergencies. This house was constructed when the Province was still a republic and needed the locales for elections and public hearings. Now, many of its rooms lays empty while the Vouvernes rule from it. This is where the final decisions are being made and often times also executed and administered. 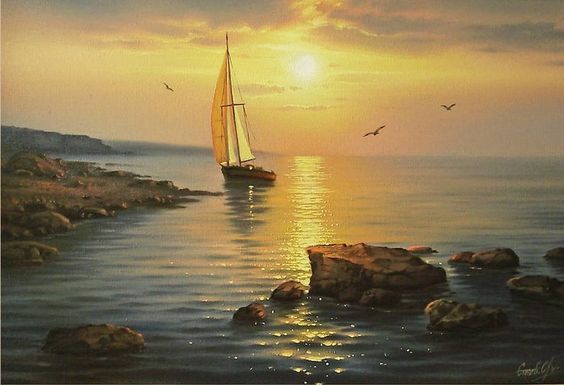 The coast which is located a few villages north of the city of Bellestuaire is what most would describe a the typical for the province. A long sandy beach intertwined with the occasional line of cliffs. While looking quite serene from a distance, could be quite the deathtrap for larger to mid-sized ships as the many rocks that littered the coast, both on land and under water could cause major damage to a vessel's hull. The local fishermen have learned how to navigate through their coastlines expertly without the need for lighthouses which have proven to be too expensive to maintain. Still, a few lives are lost yearly when a foreigner or a reckless local decides to try their luck. The area around the river estuary have, fortunately been spared of these dangerous rocks. 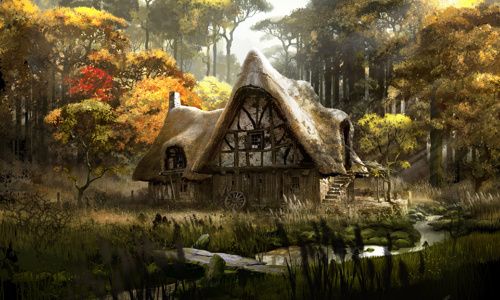 The Bellestuaire countryside is charming and picturesque with bountiful farmlands and forests filled with birds, squirrels, deer and foxes - this is especially true for the Havre area just a few kilometers away from the city of Bellestuaire. The numerous creeks of the lands sometimes creates small ponds around which an occasional duck can be spotted. While there are a fair number of smaller lonesome cottages, many people live in minor villages or insignificant towns. With the slimmed down City Guard, the rural areas are sometimes plagued with bandits and other opportunistic criminals. In general, however, it is a place where children can roam freely and the cheerful chipper of a bird's song can be heard from the trees.

History: The city of Bellestuaire started out as a humble fishing village but has since grown into something of a local trade hub, uniting people from most of the nearby lands. It had a long standing republican tradition which heavily favoured the rich and influential. The elected leaders of the city slowly through shrewd diplomacy and careful planning, managed to secure the city's sovereignty along with the loyalty of the nearby towns and villages.

The Provinces's relative insignificance compared to the larger ones ensured that it was often neglected when dangerous politics of a more continental scale was waged and the defence it had was enough of a deterrent for other powers not to make moves against it too lightheartedly. Still, in a world of powerful provinces and a strong Empire, Bellestuaire have often managed to avoid direct confrontation with any power and haven't been too hard for any side to sway. This has been essential for the province as its strategically important position by the river estuary and relatively centrally located on the western continent would otherwise have been a prime target for conquest.

After the province was turned into a feudal monarchy by the Vouverne family, the succession by seniority have ensured that they have had an unusually large amount of rulers of an advanced age. During these 110 years, the military have been sized down significantly while the diplomatic ties to other provinces have been strengthened. Now, Bellestuaire is on the rise as a centrally located trade hub and a popular pit stop for those traveling from the south to the north or vice versa.

I'm imagining this being the location of the province: