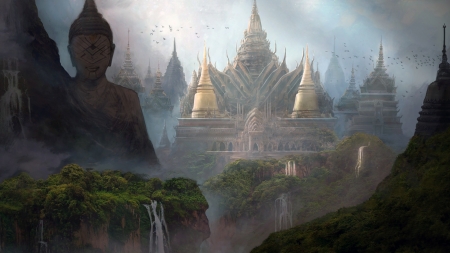 Located in the Warring Kingdoms region of Avsolom, Khriam is an ancient kingdom that appeared after the events of the Second Myst Surge, which tore a crack through Cathwa and destroyed what was known to be Meikyo. The islands of Khriam are thick with vibrant jungles and towering stone temples that push up just above the tree lines. The weather is hot and humid and it seems that the sun never sets on Khriam, which allowed their culture to form around agriculture. Strange spices are grown and produced on these islands, and are quite sought after by the Nobility in the western reaches of Avsolom, as well as various exotic fruits and vegetables.

With so much of their life dependent upon bountiful harvests, their religion and cultural myths surround topics that deal with farming. Their seasons are divided between the dry and rainy periods, and each has a significant religious undertones in their society, which has been dictated by the living Dahna, a Nagai Prophet, who guides the people of Khriam to reach the state of Dahrnai, which is the belief that one's soul eventually joins the Myst.

Unlike many of the nations in this region, Khriam is in a time of relative peace, though bloody war and genocide is occurring deep within the jungles. A native group of sapient bipedal apes, known as the Morong-Pai are being hunted high into the mountains, where only a few of their race remains.

Khriam like many of the nations in this newfound region are not originally from this version of Avsolom, but instead were part of different fabric that was sewed by the cosmos. No one quite knows why or how these threads intertwined, but it seems that the Myst works in mysterious ways, and with second surge a cluster of islands appeared in the broken lands of what was on Meikyo, leaving the known world stunned at their arrival.

Khriam like all nations in the Warring Kingdoms is not a newly formed kingdom, instead it is one that is ancient as the Old Empire itself. The history of Khriam begins with the cradle of civilization, Anorbi, which was once greatest nation in the region. It was the birthplace of many beliefs shared across the region, and is said to be where men first were found.

The people of Khriam were cult followers of one of the many gods in Anorbi known as the Nagai. The Nagai are snake like race of men who bare semblance of human torsos and snake like bottoms, and features on their face that seem to reflect both. The Nagai are held in great esteem in Anorbi faith for being wise prophets and mortal gods that walk among the people and it is said that they are the ones who showed men how to water the ground to produce crops.

For centuries the Nagai built their band of devout followers, and threatened the other gods of Anorbi like so many seemed to do. No one knows why, but a portion of the Nagai embarked on a mass exodus and brought thousands of men and women with them. It was during this exodus that they found the islands that would become Khriam, untouched besides a group of ape men they called Morong-Pai.

Quickly the forces of men, lead by their serpent overlords would engage in war against the Morong, pushing them farther and farther into the highlands where their numbers slowly dwindled. Overtime, cities began to be built and the Nagai slowly formed a theocratic government around a religion that worshiped them as spiritual guides that would lead their people to become one with the Myst, which has remained in power for thousands of years.

In present day, the people of Khriam are deeply connected to the Nagai, they seek to emulate the teachings put forth by the Dahna or spiritual leader of the Nagai who rules over their people. They have nearly wiped out the Morong-Pai and live in harmony with a group of cat-men known as the Kyangi. 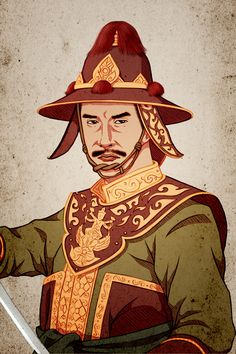 The Kingdom of Khriam is very much a theocratic monarchy, with the Dahna leading his people both in religion and in governance. Only the Nagai can hold official titles of nobility among their people, and they are often never seen leaving the cities that they have constructed. No mortal man holds governance in Khriam, and it is said that no man ever shall.

There is no complete central authority in the region, cities are not controlled by specific Nagai, but instead all belong to the Dahna. The ranks of the royal army are held by both Men and Kyangi alike. Slavery and mercenary armies are outlawed in the kingdom, and all laws are governed by the spiritual teachings put forth by the Nagai.

The Kyangi are considered spiritual treasures provided to the people of Khriam and are treated with sacred respect by most. To kill a Kyangi is considered one of the worst crimes that a person can commit in the Kingdom. The charges for such a crime will lead to the accused and their family being executed in public commons. 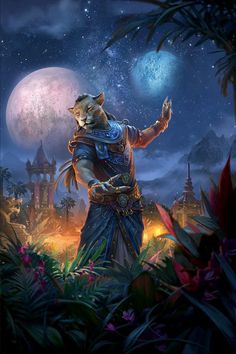 Religion in Khriam is rooted deeply among society. Everything operates on the teachings of the Dahna, the spiritual king of Khriam. Their teachings are known as Dahnasism which are set of religious principles that guide a person's soul to joining the Myst or what they call Dahnai.

The Nagai are gods to the people here, and many of the buildings and architecture are designed with serpent like mementos. Stairs are not common, but instead coil like ramps that allow for the Nagai to slide up and down temples and palace buildings.

The cat like men known as the Kyangi are considered sacred in Khriam, as the Nagai claimed that they were gifts created by them--but this is not the case. The Kyangi could be found in Anorbi, but most men from this kingdom would deny that fact.

Regardless, the Kyangi hold interesting beliefs of their own. Many worship the serpent gods, but they also have beliefs that they tie to the phases of the moon and the season of the year. For it is the seasons and the moon's position that decides the physical form that Kyangi is born with. These cat like men can range from that of a human with cat like ears, to cat men, to even a cat itself.

The culture of Khriam is extremely religious and the word of the Nagai is considered universal truth. Farming is sacred among the people of Khriam, and the rainy season and dry season hold great importance among their people. When the land is dry and hot, it is considered a test from the Nagai, and many prayers and sacrifice of humans to the Nagai are made--all in hopes of providing a great harvest during the rainy seasons of the year.

The people here practice several odd forms of Magic, many of which has been carried over from their Anorbi roots. The practice of Turakani or spiritual tattoos is heavy in this region. Many across the land can be found with tattoos, some are small and meant to provide fortitude, while others have sacred sleeves and body designs which glow when activated. Men of the Ink, are sacred mages that are trained in the arts of providing this magical ink.

The last cultural point of note is the Path of the Tiger which is said to have come from the Kyangi, and is a religious practice that allows a user to morph into a tiger and stalk the jungles in search of prey--and it is said to only be taught to the most worthy of Khriam's citizens.

Locations of Importance
1. Khran Pharat. The capital of Khriam and home to the palace of the Dahna, Mala Bon Priat, which is known as the Palace of Jade and Gold in Imperial Tongue. The City here stretches for many miles and is home to many great palaces and a trade port in which many Ash Elves can be seen trading goods with the people.

2. Yasoan Amorat. Another Port City, that looks out towards the Meikyo Shogunate. It is heavily defended and is considered the capital of the Khriam military. There is also a large population of Kyangi that live in the city.

3.Khaoman Turat. Known as the White City, this city is home to many men of the Ink, and is built in a strange white marble. The men and Kyangi here where all white robes, and it is said that Nagai here are albino with pale white skin.

4. Marang Tongrat. Once the capital of the Morong-Pai, this distant land is far removed from the rest of Khriam, but is still an important site for the country. It serves as a supply point for the Khriam soldiers who are currently hunting down the last of the mysterious ape-men.