The Northern most island of the known world, Nal Akima is by far the coldest land in Avsolom. With temperatures reaching to the freezing point of water, it is especially dangerous to traverse the mountains during their winter months. The peaks of Nal Akima, named the peaks of Nalak, are said to pierce the heavens as not even the clouds can go that high. Few have tried to climb the treacherous heights; even fewer have returned alive.

But Nal Akima used to be considered a paradise as the land itself was bountiful in all things and its denizens knew nothing of war and strife, living peacefully alongside one another and nature itself but this was before the great Cataclysm. As the surge broke the land apart, storms brewed over the mountain peaks, hailing them with ice and snow, ultimately destroying the land that was once vibrant and teeming with life. Even now, hundreds of years later, the Myst’s influence over the land as a result of the Cataclysm is considered by many to be a permanent change with no hopes of ever returning to their land to its edenic beginnings.

It was not only the land that had changed with the exposure of the Myst being felt across Nal Akima but so did much of its wildlife and the people themselves. In the beginning there was a nearly unending cycle of strife and violence as those who had survived the Cataclysm were now forced to fight for their lives at every waking moment due to death of so much of their flora and fauna they onced readily relied upon.

It had become the survival of the fittest and this is where much of Nal Akima’s culture as of day was born. Tribes and clans formed themselves together, hunting what they could find and harvesting what was left but more importantly to wage war against those who were not apart of their own clans or tribes and take what they had for themselves. It was a time of savagery and carnage and their darkest chapter.

Due to the unparalleled destruction that the Myst wrought across their land, the citizens of Nal Akima have leaned heavily into distrusting any and all who display their magical capabilities, some even go so far as resorting to outward hostility and prejudice. As an addition that furthered their mistrust of anything related to the Myst, there was a historical footnote that involved an uprising of men and women that followed a fabled ‘Valkyrie Queen’ who sought to destroy those who did not bend the knee to her self imposed rule of the land. She altered many of those who sought to display their devotion by transforming them with her magic born from the Myst.

Only through a terrible plan of action involving magic of their own were they able to put an end to the Valkyrie Queen. Yet it was at a great cost and once again ended up altering the land through the use of its destruction aimed at putting an end to her reign of terror.

Aside from the country as a whole, there is still one (mostly) safe space for Magi on Nal Akima and that is the city of Nal Sur. Located at the Western base of the island, Nal Sur is closest to the Archipelago and therefore also nearest to the Old Empire.

Nal Sur is used as a way point for travelers wishing to cross the sea between the islands on the North end, rather than crossing all the way around. The constant traffic brings not only resources and exports to and from the island, but it also brings with it the culture of the rest of the world. In doing so, Magi are less likely to be targeted for their skills, though some of the locals have been known to be cross during their dealings with them.

The Council Of Axes 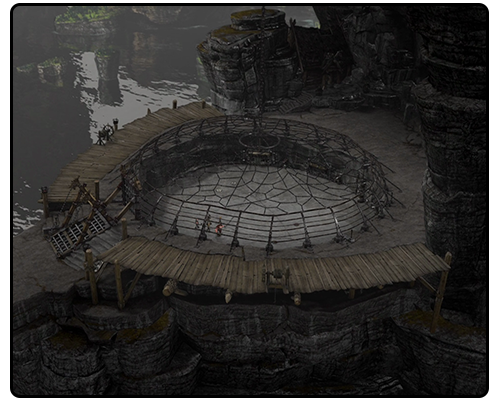 While there is no true governing power within Nal Akima, there are a series of clans throughout the peaks who have come to a beneficial agreement of maintaining relatively peaceful relations in order to prevent all out wars like the days of old.

These clans typically do not bother one another but will maintain beneficial trade through proxy villages that are generally not aligned with any of the main tribes or clans. Although if aid is requested against particular threats they are known to join forces either through a series of quick agreements or outright based on good faith to back them up whenever another threat emerges.

Though typically, the threat is against the weather itself so clans have been known to intermix every now and then when the seasons take a turn for the worse and one clan's village gets buried in ice. When larger matters need to be settled, the clan leaders will hold a council of the chiefs from each village to discuss politics and any other dilemmas their nation is currently facing.

Made up of all men and women in varying sizes and builds of strength, agreements are settled by the art of conversing until disagreements arise and then it’s simply back to the old ways of solving matters with a ‘friendly’ round of fist on fist combat. It's no surprise an aggressive culture such as theirs handles things more smoothly in terms of strength than their words however.

Prejudice is not an inherent trait. It must be learned. Or taught. The Holy Swords are a way of doing just that. Purebloods, they call themselves, a group of rebellious vikings who chose to do something about the increasing numbers of Myst users in a spike of fear from the days of the Cataclysm and the tyranny of the Queen of Valkyries. With their skills in their blades and strength in their axes, they seek to rid not only their own continent from the Magi but the whole world as well, even if it is a lofty goal in the eyes of outsiders.

Fully committed to the idea that the Myst will one day wipe them all out, their swift executions are done without mercy. They are set on a path of blood and believe their righteous cleansing of the world will save the people from utter destruction that they saw done to their own land through the exposure from the Myst, the Cataclysm itself and the Valkyrie Queen who used it with little regards to the mass scale of destruction she wrought with it. With their hidden base located on the Peaks of Nalak, only someone born and raised on those mountainside could navigate the harsh storms to find its whereabouts.

This adds to the nationalism the vikings feel for themselves and the duty to all mankind. They've wormed their way into the council of axes and now all of Nal Akima support their efforts. It will only be a matter of time until the very ports are patrolled and barricaded.

Although as of late there has been a worrying amount of reports that members of these councils who are either sympathizers or absolute members of the order have either been turning up dead in the wilds or outright missing. Some of this has also been attributed to rumors that the Queen of Valkyries has returned and is exacting her revenge albeit slowly and methodically to avoid the attention of the tribes and clans in power. Yet others simply explain it away that there is something of a culture shift and that prejudice is no longer being tolerated. No true answer is yet discernible.