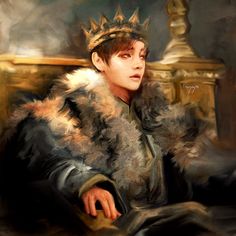 Located in the Warring Kingdoms region of Avsolom, the Empire of Konzu is the remnants of the nation once known as Meikyo. When the Second Myst Surge occurred massive tidal waves wreaked havoc across the splitting Meikyo nation, killing thousands and leaving the nation on the brink of destruction.

With feudal lands left destroyed, it seemed the Shogunate system of feudal shogunate system that had been in place for so long was on its deathbed, and it was time for the return of the ancient traditions. Before Meikyo, came the Great Empire of Konzu that was ruled by the Fujimori clan before being disposed of and executed by the then Shogunate. But, in the time of great need, a boy has returned from the distant shores of Mai-Qi, claiming to be Daisuke Fujimori, the last rightful heir of the Fujimori lands--sending the remnants of the land into chaos and civil war.

The two sides are split into two factions: The Imperial Army which consists of Daiymo and the clans which have sworn loyalty to the boy Emperor, and The Meikyo Shogunate which consists of the Daimyo lords still loyal to the feudal dictatorship that had been in place for centuries. The war seems to have fallen into a stalemate and it seems the end is nowhere in sight, as many Daimyo and clans look to use the conflict to their own gains.

To make matters worse, Myst Born demons that invaded the neighboring province of Husan have slowly infiltrated Konzu, terrorizing locals and pillaging roads. It is a dangerous time to live in Meikyo, and most citizens fear for their lives. Is this the end of the once great nation or the rebirth of a powerful ancient Empire?

The land of Konzu has always been one of great war and constant conflict. For centuries clans ruled over little areas along the mountains, fighting among themselves and the elves. Clans would come and go and it seemed that the land was always destined to be a tribal warzone, but little did they know the greatness that was to come.

It was under the combat prowess of the Fujimori clan that Konzu was united under one banner, and it was here the golden age of Konzu had begun. The First Empire had established roads, designed written text and a unified culture. All was well, and the Imperial Army had pacified the lords of Konzu, by giving them the title of Daiymo or land owners. These Lords directed their concerns to the Imperial Commander, the Shogunate, who oversaw the protection of the Empire.

This system existed for thousands of years, and slowly over the time the Shogun had begun to gain more power for themselves, while the Imperial family toiled in pleasure and affairs away from governing. Eventually this usurping of power would come when the 22nd Shogun of Konzu, Daitsue Motoshi, marched into the Imperial Palace and slaughtered the Fujimori clan, and ending their line--or so he believed. 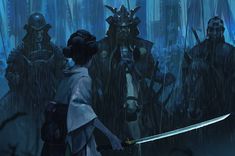 It was then that the age of the Motoshi Shogunate began and the Empire of Konzu fell. Daitsue changed the name of their ancestry, naming it Meikyo, and did his best to wipe away the Empire's history. Power was centralized with Daiymo close to the Shogun and wars constantly broke out among them. Assassinations were common, and constant clan warfare seemed to engulf the land.

For thousands of years periods of peace would come into place, followed by spurts of chaos and strife, with it came a shorter and shorter era, each Shogunate seemed to fall quicker than the last. Before the Second Myst Surge, Meikyo was under the Tonoshiri Shogunate, which was marked by the iron clad control of the Tonoshiri, who were a brutal clan that slaughtered many who opposed their ideals.

It was the totalitarian ruling that left many Daiymo secretly planning to overthrow the current Shogun, Tazuna Tonoshiri, though many did not have the backing to make a play for control. So the perfect storm had arose for a boy who claimed direct ancestry of the Fujimori clan arrived from the stable Mai-Qi Empire, many Daiymo pledged their sword to this boy and an Imperial army was quickly formed. There have been speculation that this all a ruse and that the boy, Daisuke Fujimori, has no direct ancestry, but this has been lost in the brutal war that has engulfed the land. For now two sides are locked in a bloody battle, Imperial and Shogunate for the fate of the newly titled Second Empire of Konzu. But, a more sinister threat lurks among the deep forests and mountains. During all of the fighting, the demons of Husan have invaded Konzu and threaten many villages and the Konzu way of life. 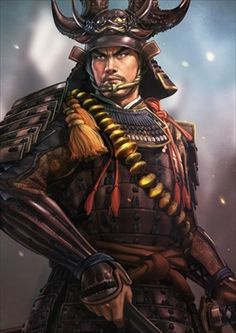 The Land of Konzu can be split into two distinct factions, though both have different ideas on ruling and what Konzu means. Each side aims to bring prosperity to the people, though many doubt this to be the case. Instead, it is about which sect of Lords gains more power for their families.

The first faction in Konzu is known as the Tonoshiri Shogunate, which is lead by the military dictator, Shogun Tazuna Tonoshiri, from his southern capital of Yakano. The Shogunate makes up the southern portions of Konzu and the Daiymo (Lords) that are loyal to his command. Here the people provide most of their farmed produce to the Lord, who provides their allotment to the Shogunate and his men. Citizens have little rights, but nobility have more freedoms under the Shogunate.

The second faction is the newly named Second Empire of Konzu, which makes up the northern regions of Konzu, and its capital is Itsumi. It is lead by a supposed member of the long lost Imperial line, and the Daiymo who have sworn loyalty to the boy-emperor. Citizens have more freedoms under the Empire, and the Daiymo and the Imperial army are sworn to provide their lives in service of the Emperor, even with death if needed. 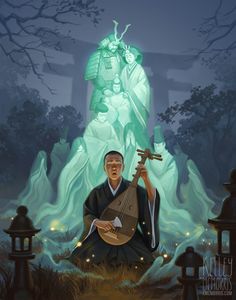 Religion in Konzu is often subtle and doesn't take a center stage in most of their text and history. They have long worshiped and accepted the Myst during both the original empire and the various shogunate. Magic is widely celebrated and practiced among commoners and nobility alike.

The people believe that when their ancestors die, they pass on to the Myst and slowly overtime begin to develop powers of gods, and thus ancestor worship is common. Shrines can be found in houses of both nobles and the poorest of peasants. Those who are trained or hold titles of Nobility are able to practice the art of Shirigami, a form of ancestor summoning, which channels the Myst of their ancestors in raw forms of energy, shaping the person temporarily and providing them with great strengths of power. Common examples of the form may be that of a large samurai, a leaping tiger or a swooping bird.

Konzu is very much a caste based system, and it is nearly impossible to rise from one's position once you are born. On the top there are the Emperor or the Shogunate, a powerful ruler who holds control overall land and all Daiymo are sworn to serve them, and the nobles are split across the country on who to side with. The Daiymo are Noble Men/Women who hold plots of land that often hold farmland, cities, or towns. They are men that are trained in combat by their clans, which often control or make up the villages.

These Daiymo and clans often have their own history and feelings about other lords, and battle often breaks out among them, and they often employ a warrior class known as Samurai. Samurai are men and women who are sworn to a particular land or clan and live by code of honor known as Bushido. Some Samurai forgo their sense of honor and travel the land as Ronin or mercenaries and are looked down upon.

But, this is not to say that all of Konzu fights honorably. Nobles often employ the work of Ninja clans for assassinations and espionage. Many great ninja can be found across the war torn lands, and some can even be found in the distant lands of Rhisoka. These men and women are looked down on by Samurai, as they see no honor in hidden tricks and killings.

Locations of Importance
1. Itsumi. The capital of the Imperial forces of Konzu, this port city is massive and home to the Imperial armies and many Daiymo who gave their lands to build the city. There are two palaces in the city, The Palace of the Dead a forbidden and ghostly palace that is sealed away and serves as a reminder of the Fujimori clan, and the new Imperial Palace where Daisuke Fujimori sits.

2. Oukai. An Imperial city located on the cold Northen island of Jyushu. The men here are rugged and disciplined and have an extreme loyalty to the Fujimori Empire.

3. Tsuno. Is a city that is an important city of trade that sees ships from Nal Akima and Anorbi arrive. The city is a conflict zone with constant warfare between the Empire and the Shogunate, with each side taking and losing the city within a few weeks of each other.

4. Yakano. A large city that serves as the Capital of the Shogunate. Large trading docks are often full of Khriam and Anorbi ships. It is also well defended with the Shogun's forces.

5. Izanai. A large town that is sworn to the Shogunate. It serves as the central hub for the farming and agriculture supplies that feed the Shogun's army during the war.