History​
The Blightmen of Kreige is a sad, cautionary tale of the pure, destructive force of the Myst. During the second Myst surge, a meteor crashed into Kreige and sowed destruction in it's wake. The sheer destruction left in it's path dubbed Kreige it's new name, the Deadlands. 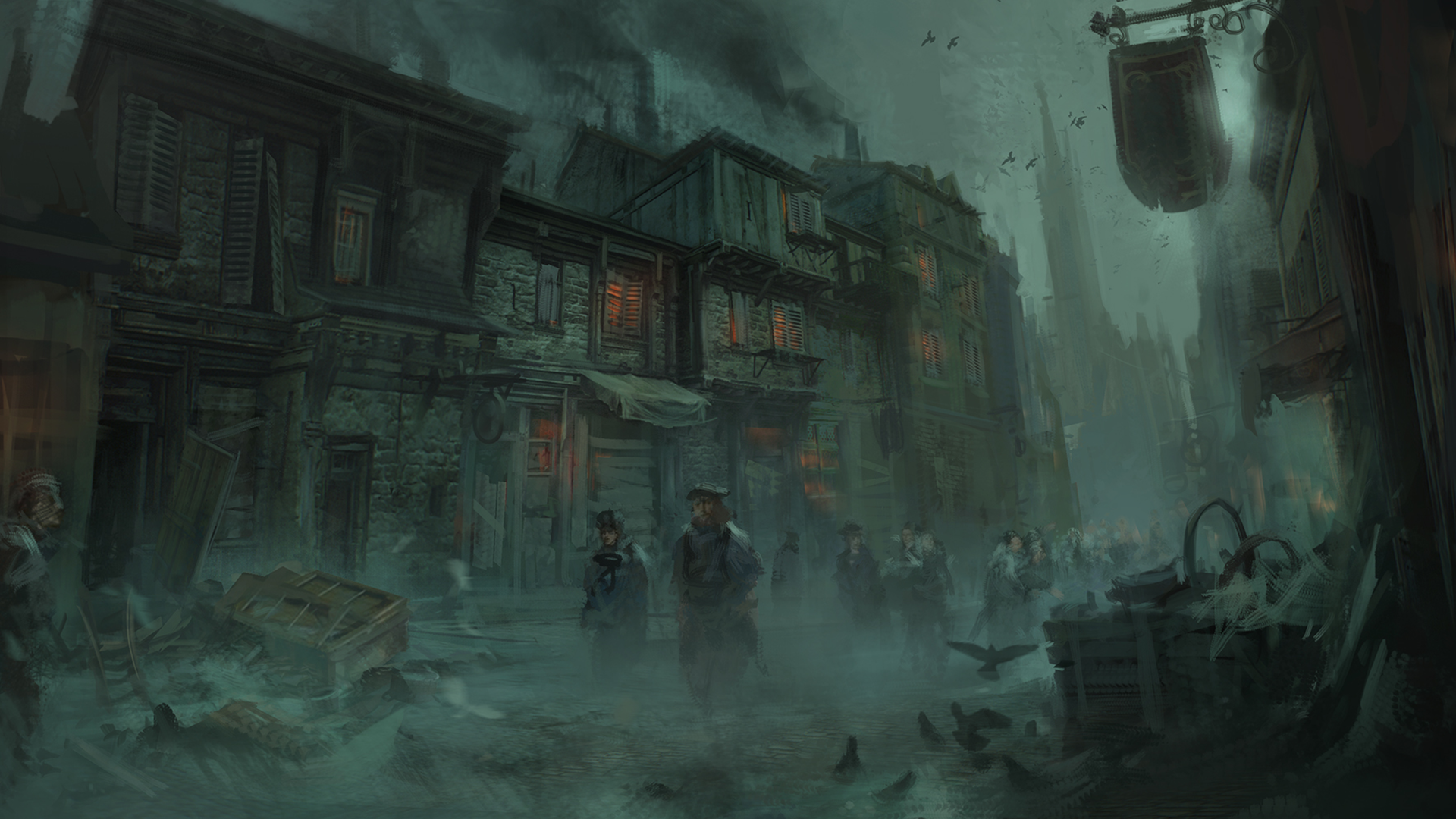 The people of Kreige, however, were not blessed with death. By a twisted sense of fate, they rose to life again, with dim memories of their pasts, and skins ashen, eyes a weird glowing yellow. If at first a few of these poor felled women, men and children would have risen, it could have been blamed by necromancy, but in fact it was en masse, a large population of those once dead now alive... but only just.

As such, the Old Empire, baffled and alarmed by such creatures, ordered a massive wall of stone and wood to be erected to protect it's peoples from such an unknown as the now-dubbed Blightmen, thus forever cutting them off from the rest of civilized Avsolom.

A few brave souls still dare to cross this massive wall in favor of trade, and dare to brave the terrors that lurk further inlands of these Deadlands. And some are blessed with riches... and some less blessed, either driven to madness or to death.


Culture​
Blockaded from the east by mountains, and from the North and South by Leore and other provinces of the Old Empire, respectively, these beings are left to their own devices, only loosely bound by their old ways of life, to perhaps embrace new ideas despite this place of terror. Artisans, and other proud worksmiths now have a seeming eternity to ply their trade; or at least, those few that can recall their trade and are not driven mad by the sheer overwelling of Myst presence. Those few that are not overwhelmed by the Myst have begun to work their old trades again, as silversmiths, black-smiths, and weavers. Those few that were once agricultural have instead turned to alternative trades, and as such, these beings that have retained sanity instead seek what knowledge they can within their limited scope to find answers. Thus has begun a new culture in this dead, dispiriting land; the seeking of knowledge.

Their religion, however, has adopted that of a monotheistic religion. Though previously boasting a religious centerpoint for all of the Twelve within the city of Dawn's Light, all but one remain empty of any devout.

That of Gorro, God of the Underworld. And a new statue erected by his side, in the likeness of their Queen, Morgana, renamed Morganthe. She claimed to be the sister of Gorro made flesh, the Goddess of the dying and the reviving of those dead. Though there seems some faint credibility to that statement, her form is also that of a great raven, it is claimed, of three eyes and a woman's voice, whom if they call your name, will seal your doom and spirit your soul to her brother's domain forever.

Though Kreige has once had a seaport and access to the greater trades of Avsolom, with the rumors of its' most recent tragedy very few ships dare to dock near such haunted waters. With no need for nourishment, there is no need for tradesgoods or fishermen; the most business that ever leaves is the occasional curious wanderer... or a dying man in search of an answer for supposed immortality.


Blightmen​
Unlike the reanimated ilk of those who call themselves necromancers, Blightmen are, for the most part, still sentient beings, with some vague memories of their pasts before the meteor impact. The trademark features of most sentient Blightmen are their glowing yellow eyes, ashen pallid skin, and somewhat gaunt features; a few are touched with rot and some are missing limbs/eyes/digits from the blast of the meteor, but otherwise seem as close to the living in at least physical togetherness as before. Though primarily human, some of those unfortunates touched by this odd condition have also been residents of other races, such as Elves.

And Blightmen itself is a misnomer; there are those of women and children as well, equally affected, but curiously no animals affected by such an odd event. However, not all these ghoulish people are as docile as some would believe. The further inland to the center of Kriege you go, the more savage its' people, the more twisted its' creatures of the Myst become, and though the Blightmen can use Myst as they had in their lives before as Magi or other users, it is in fact frowned upon, as some users had gone feral and violent with such an overflowing abundance of Myst, snapping their tenuous remainders of humanity and turning to hungering, almost bestial ghouls instead. 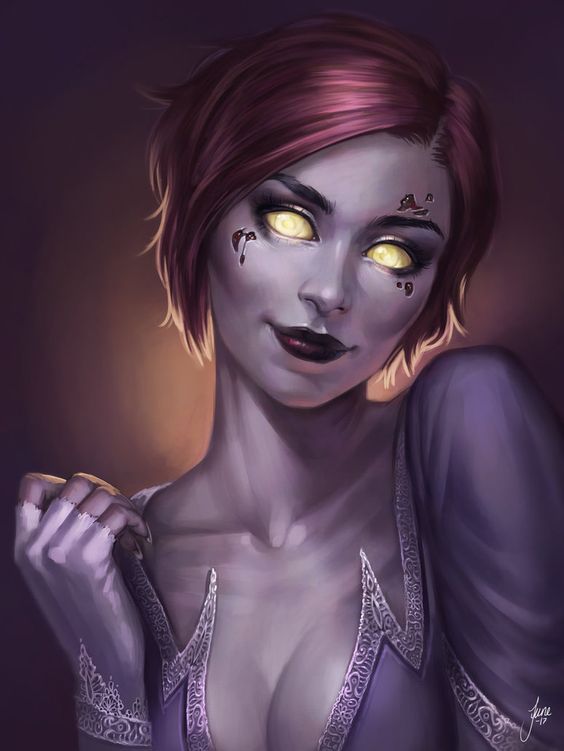 Geography​
Much like how Kriege once was at the height of its' living glory, the villages and cities still sound with some semblance of life. However, what was once Dawn's Light, the great capital of Kriege, has been aptly renamed Dusk's Rest by those living enough to remember it once as a place of influence and intellectual wealth. Though its' walls are being rebuilt by those once dead twice alive, the atmosphere is one of oppression, and despite the recent endeavor to understand why the Blightmen exist as they do... there is an overwhelming silence that fills the once glorious streets of Dusk's Rest.

Much as there was once a pass through the mountains bordering the east of Kriege, there now lines a massive Wall to fend off the mystery of Kriege, called Dawn's Wall. Once an outlet of land port for traders and travelers alike, now only those of the Black Watch keep a weather eye for sentient and fell of these strange Blightmen. And to the North, barring the way for those few of strong mind enough to dare, is Barrow Town, and looming over in the craggy mountains rests the foreboding Black Keep, second stronghold of the Black Watch.

The Port, now renamed Rotting Port, is a ghost town of few ships and fewer residents, living or not; beasts have begun to spawn there, closest to the remnants of the meteor landing and sheltered enough for those that seek glory and answers for Kriege's demise may yet meet a soft bed... but somewhat hostile tenants in the forms of feral Mystborn and other fell creatures, twisted by madness and despair that is an overwhelming presence of the Myst.

And at the very heart of Kriege itself lies the crater.

Now renamed The Deadlands itself, there is no whisper of wind nor cry of birdsong. No trickle of water, nor wisp of dark cloud, but a dry, barren, frigid place, a wide plain home to twisted beings that even the Lantheri wilds shudder to think of, stories of demons and broken Blightmen are whispered, and yet the wealth of power and lore of the origins of such a cataclysm remain buried in the heart of it, framed by the lulling forms of the Hollow Hills. If there was only one brave enough to venture in search of such knowledge...


Black Watch​
Criminals, orphans, vagabonds, and bastards alike are all welcome to join the Black Watch, or so they say. Those that are judged for death by the Old Empire's courts may yet find themselves a redeeming chance to survive yet another day by patrolling the dead lands of what was once Kriege. They are led by an honorably-served veteran of war, called a Commander, and those that prove themselves serviceable guards in the name of their Emperor can, perhaps, after a decade of serving the Wall, may yet find themselves open for freedom and pardon. The punishment for deserting their post is death, as well as attempting to breach the wall for Kriege, as that is yet for now considered simply another method for suicide. They may not have families nor attachments, and though female prisoners are often also drafted for the Watch, they keep to their own watch and quarters to dissuade fraternization. Those that disobey their Commander will thus be put to death, and those that seek to break the laws they adhere to will seek the same punishment, sent to the Deadlands with nothing but a day's rations and water, so that they may learn the price of serving their sentence.